You only turn 20 once, so you should mark the occasion somehow. What did John Brzenk do when he turned 20? He competed in the World Super Heavyweight Arm Wrestling Championship!

The Venue: The Marriott Hotel in Bloomington, Minnesota, just south of Minneapolis.

Why it was a big deal: It featured one of the greatest assemblies of armwrestling talent in a single class up to that point in time.

Elite armwrestler and future professional wrestler Scott Norton teamed up with promoter James Evans (the owner of a gym where Scott trained) to put together the World Super Heavyweight Arm Wrestling Championship – a tournament that attempted raise the sport’s profile. The nice venue and sizable cash prize purse were expected to attract top talent and lots of spectators.

Approximately 500 fans showed up, but only nine men made the trip to compete in the special tournament. Though small in number, the pullers were impressive, to say the least. Included in the class were John Brzenk, Cleve Dean, Chick Huntsberry, Scott Norton, Mike Shadduck, Danny Stone, Johnny Walker, and John Woolsey. In case you’re unfamiliar with some of these athletes’ résumés, you can learn more about them as they almost all appear one or both of my lists of the Top Pullers of the ‘70s and Top Pullers of the ‘80s.

Right out of the gate, John Brzenk was matched up with Scott Norton, a 6’3” 350-lb behemoth who could bench press 550 lbs and do a 375-lb behind-the-neck press. Using his very quick and extremely powerful press, Scott pinned John in a flash. John would only get the chance to pull Scott in a tournament on one other occasion in Reno in January 1985, and lost both matches as well. Scott retired from the sport before John could get another chance to avenge his losses. Norton was one of the very very few who can say that they have never lost to John Brzenk.

In his second match, Scott lost to Cleve Dean on fouls after a long pull for repeated releases of his hand grip. Eventually, in this double elimination event it got to the point where John and Scott should have pulled again, but a decision was made by the promoter that Scott had to pull Johnny Walker instead (who was also put into the losers’ bracket by Cleve). Scott had not sufficiently recovered form his marathon match with Cleve and was eliminated. He walked away with a fourth place finish and $1,000.

In the semi-finals, John pulled Johnny, and Johnny won. In 1984 John was just starting to figure out what to do against Johnny. He managed to beat him earlier in the year at a tournament in Reno, but on this day, Johnny was the better man. Still, a third place finish for John as well as a $1,500 cash prize was a good haul for a young man just entering his third decade of life (especially considering the competition).

In the finals, Johnny attempted to hold off Cleve a bit longer than he was able to in their first match. But alas, the pig farmer from Georgia was just too much for him. Johnny earned $2,500 for his efforts, while Cleve walked away with a cool five grand. Cleve had no losses, and in fact his announced presence at the event is one of the reasons there weren’t more pullers in the class. In the mid-’80s, he was the reigning king of the sport – everyone seemed to be competing for second place. 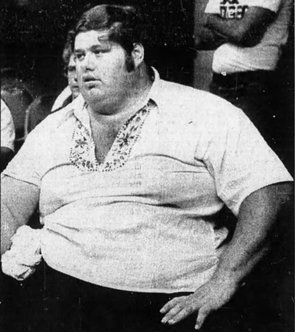 There’s an interesting “what if” scenario related to this event. Believe it or not, Richard Lupkes was competing in a separate tournament that day: the Upper Midwestern U.S.-Canadian Championships which was taking place just a few miles away. He pulled and won the two classes he entered – the 220 and the 221+. Now, in 1984 Richard was not yet the man he would become in the late ‘80s when he was dominating the sport. Nonetheless, it’s fun to imagine how he would have fared among this group of super-pullers.

This special event was only held the one time. One of the major sponsors backed out at the last minute, leaving the tournament promoter to cover the shortfall. What I find most interesting about this event is that it offered what is believed to be the biggest first place cash prize ever awarded in an armwrestling tournament (up to that point in time), yet almost no one has heard of it. In my opinion, it occupies an interesting place in armwrestling history.