​​This is a compilation of “firsts” in armwrestling. These are the earliest known documented instances of which I’ve come across in my research on armwrestling history. So “first” may not necessarily be the “absolute first”, but rather the “earliest known”. Should new knowledge come to light, the list will be updated.
​1851 – FIRST ARM BREAK: ​Occurs in a New York saloon 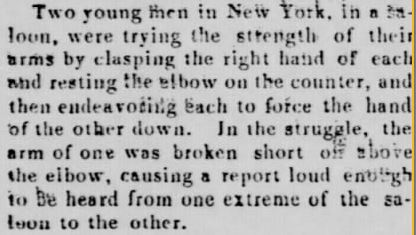 ​1898 – FIRST WRITTEN DESCRIPTION OF THE SPORT IN A BODYBUILDING MAGAZINE: ​​In Eugen Sandow’s “Physical Culture” publication

1925 – FIRST STRAP MATCH – A 3-out-of-5 challenge match for the title of Canadian Armwrestling Champion between reigning champ Théophile Massé and challenger Placide Laframboise (Montreal, Quebec). Their hands are tied together for all of the matches. Théophile successfully defends his title by winning by a score of 3-1.
1928 – FIRST ARMWRESTLING ASSOCIATION – Tetsu Yamamoto forms “The Yokohama Hand” in Japan (arm sumo)

1955 – FIRST USE OF ARMWRESTLING IN A SALES PROMOTION – Challenge issued by used car dealership sales manager and professional wrestler Brute Bemis. Anyone who could beat him would receive a discount on a used car. 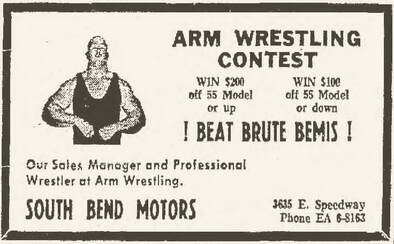 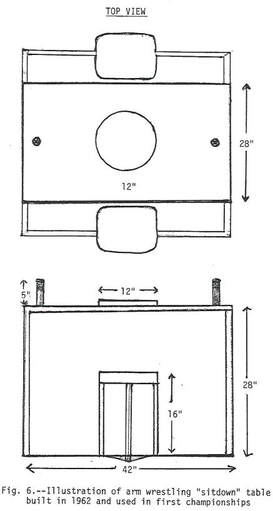 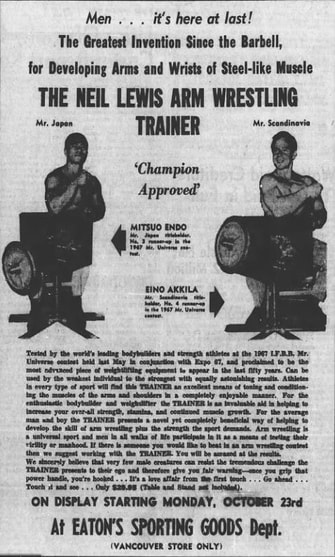 1972 – FIRST MAJOR CASH TOURNAMENT – The Carling World Wristwrestling Championships held in Timmins, Ontario, Canada. $500 is given to class champions and $100 is awarded to the runner-ups.


​Researched and Written by: Eric Roussin