Winning a title at a major armwrestling tournament is an accomplishment. Winning in back-to-back years proves that the first win wasn’t a fluke. Three years in a row makes a statement. What about four, five, six years or more? “Impressive” increasingly becomes an understatement.

Winning titles with the same arm at the same event year after year requires consistency in terms of ability, but it also requires quite a bit of luck. It means that sickness or injury is avoided when tournament time comes, and there are no work and family obligations that prevent one from attending.

The record win streaks presented below were so remarkable that the winners were probably thinking “Don’t even bother attending. If you pull in my class, you’ll be competing for second place.”
​ 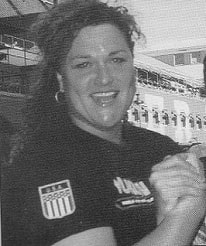 Dot Jones
​
Between 1990 and 1996, the Yukon Jack Finals was the biggest professional annual tournament. Each year, the event offered the biggest prize money and attracted the world’s very best pullers. Many people consider 6’4” Dot Jones to be the top female armwrestler of all time and the Yukon Jack tournaments were held when Dot was in her prime. She didn’t attend the inaugural event in 1990, but she did compete every year between 1991 and 1996 and didn’t drop a single match!
​ 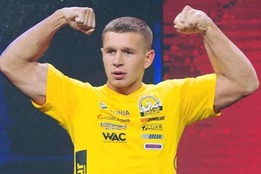 Oleg Zhokh
During the first two decades of the 21st century, the Nemiroff World Cup (aka Zloty Tur) was the most consistently toughest pro tournament to win. Many of the elite Europeans attended, and if you won a title there, you were instantly regarded as one of the very best pullers in the world. Ukraine’s Oleg Zhokh’s left arm is quite possibly the strongest pound-for-pound in armwrestling history. He built this reputation in part through his performances at the Nemiroff World Cup. He first attended the event in 2010 when he was just 18 years old. He won and proceeded to return every year until he had accumulated seven titles in a row by 2017 (note that a tournament was not held in 2014). His streak was on track to continue, but he was involved in a horrific car crash on his way to the 2018 event.
​ 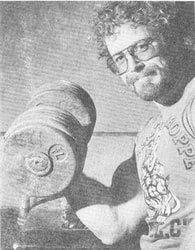 George Givens
Between 1978, when it was officially formed, and 1991, the American Armwestling Association sanctioned two national championships each year: one for stand-up and one for sit-down competition. Middleweight George Givens was particularly good at the sit-down style. So much so, that he won titles in the right-hand 185-lb class (or equivalent) at the AAA Sit-Down Nationals every year between 1983 and 1990!
​ 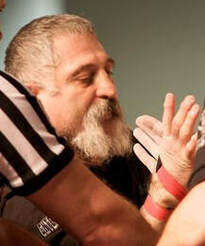 George Iszakouits
Since its first year in 1998, the Arnold Classic Armwrestling Challenge quickly established itself as one of the world’s premier tournaments. Canada’s “Crazy” George Iszakouits was a late-bloomer on the world stage, enjoying his peak performances in his 50s and 60s.  In 2003 he attended the Arnold Classic and took first in the 176-lb class. He went back the following year, and the year after that, and the year after that… and kept on winning! He finally missed the event in 2012, after he had won titles nine years in a row. Some of the men who tried unsuccessfully to unseat him during his reign included Allen Fisher, Cobra Rhodes, Denis Dubreuil, James Smith, Chris Chandler, Artem Taynov, Andy Barker, Chad Silvers, Anthony Dall’Antonia, and Pascal Girard!
​ 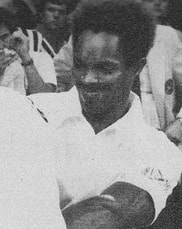 Johnny Walker
One of the biggest annual professional events of the late 1970s and 1980s was the World Professional Armwrestling Association (WPAA) World Armwrestling Championships. With its prize purse and television coverage, it rivalled the World’s Wristwrestling Championship. The event was contested using a single elimination format, so mistakes were costly. But between 1977 and 1985 Johnny Walker didn’t make any mistakes. He won titles every year and only stopped attending when the cash prizes were significantly reduced.
​

The WAF World Championship title is recognized by many as the only “true” world title in the sport. Winning one is extremely difficult. Over the years, several pullers have been able to win multiple titles, but two pullers stand above all others for consecutive wins. Ukraine’s Rustam Babayev and Russia’s Vika Gabakova each won nine senior division WAF world titles in a row, with both arms! Rustam accomplished the feat between 2004 and 2012, while Vika was the first to do it between 1994 and 2002. Two TRULY dominant pullers. 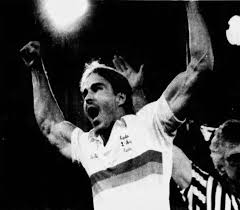 Dave Patton
​In the 1980s and early 1990s an annual professional tournament was hosted in the remote town of Amos, Quebec, Canada. The tournament was called the North American Armwrestling Championships and the cash prizes were large enough to attract many of the continent’s best professional pullers. Dave Patton made the pilgrimage each year between 1982 and 1992 and won titles every time (note that a tournament was not held in 1986 as the date coincided with the Over the Top World Championship – which Dave attended and won). 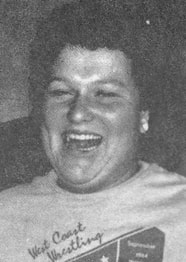 Dot Jones
​The Petaluma-based World’s Wristwrestling Championship has the most storied history of any annual tournament. It was the first “world” event and was broadcast on national television for 15 years. This coverage introduced the sport to millions, and consequently it typically attracted a large field of competitors. Dave Patton was the first to win 10 WWC titles in a row, between 1981 and 1990. It was a decade of dominance. But by the time he won his 10th title, Dot Jones had already won her 8th title in a row in the women’s unlimited division. She returned the following three years and broke Dave’s record. A remarkable 11 right hand titles in a row between 1983 and 1993. 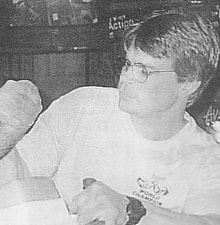 John Brzenk
​For more than 20 years, there were three annual tournaments in the US that offered national titles: the USAF Unified Nationals, the AAA Nationals, and the USAA National Pro/Am. Only the USAA National Pro/Am offered cash prizes for the pro classes during this period, and as such, was the one that attracted John Brzenk. John made the annual trek to Lake Tahoe, Nevada, each year between 1995 and 2007 (Rising Sun, Indiana in 2006) and won right-hand titles every time. Even more impressive is the fact that he always pulled two or three right-hand classes and won at least two titles every year except in 2005. 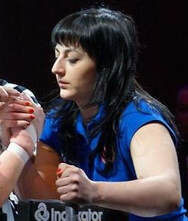 Irina Makeeva
​The EAF European Championships is regarded as a tournament with consistently stacked classes. Given that Europeans have been securing most of the podium spots at the WAF World Championships for more than 25 years, it’s not surprising that titles at the European Championships are almost as difficult to win. Which is why Russian Irina Makeeva’s streak is perhaps the most extraordinary streak of all: she won senior division European titles 16 years in a row between 2004 and 2019, and except for 2004, she won titles with both arms! Mind-bogglingly impressive!

Special Mention:
​
Biggest Prize Money Tournament of the Year Titles – 10 in a Row 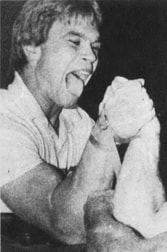 John Brzenk
The tournaments that have offered the largest prize purses changed over the years, but one thing remained consistent: John Brzenk, History’s Most Successful Puller, sought them out. Between 1984 and 1993, he won titles at the Biggest Prize Money Tournament from each year. Whether it was the AAA Stand-Up Nationals in Texas, the Over the Top World Championship in Las Vegas, the International Championships in Reno, or the Yukon Jack Finals, he went everywhere, and won everything.