The Ancient Hawaiian Sport of Uma 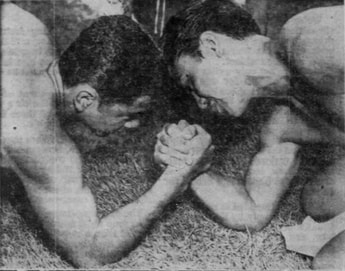 In his analysis of available evidence, fellow armwrestling historian Oleg Stepanov concluded that a form of the activity has existed in Japan for several centuries. In my own research, I’ve found that armwrestling matches were common occurrences in New France at least as early as the mid-18th century. There is yet another part of the world where a form of the sport has been practiced for hundreds of years: Hawaii.

In the centuries prior to the first European contact with Hawaii, the Hawaiian people devoted a considerable amount of time to sports and games. Sports served two primary roles: to hone skills in preparation for battle and for leisure.

From the time the Hawaiian islands were first settled up until the late 18th century, wars were very frequent between the various chiefdoms. Ambitious chiefs were constantly trying to expand their territories. In times of peace the whole adult male population was virtually a reserve army. Hand-to-hand combat was a staple of Hawaiian fighting, and so sports – particularly one-on-one sports – played an important role in keeping warriors’ strength and skills at a high level so that they would always be ready for battle.

Religion played a central part of ancient Hawaiian culture, and there were many laws and restrictions. The penalty for breaking one of these laws was death and the people believed that death could follow the breaking of a law even if the law breaker was not immediately caught. Games served as a welcome release from this oppressive system, and they helped people relax from the toil of furnishing the necessities of life for themselves and for their chiefs.

Over 100 games were developed over the centuries. One of these was called “uma” (commonly referred to as “Hawaiian arm wrestling” in more recent times). Two participants would kneel on the ground facing each other, bend over, place their elbows on the ground, and clasp their right hands in the common arm wrestling grip (with thumbs interlocked). The objective was to make the back of the opponent’s hand touch the ground, without lifting the elbow off the ground.

The sport was occasionally practiced with competitors lying down, rather than kneeling. Matches were overseen by a referee who gave the start command (the same command given for all the ancient Hawaiian games) and declared the winner of each match. If a match did not end within a given amount of time, the referee could declare a draw or assign the win to the competitor who appeared to be in greater control of the match.

The traditional uma starting position
All chiefdoms in ancient Hawaii observed an annual festive season of roughly four months called Makihiki. The season was dedicated to the god Lono, patron of sports (also the god of rain, agriculture, harvest, peace and fertility). During this time – approximately mid-October to mid-February – all wars stopped, taxes were paid, and all unnecessary work was forbidden. The people paid their taxes to their chiefs in the form of handicrafts and garden products and were then free to enjoy rituals, feasts, festivals and games for the remainder of the season.

The Makahiki games could be considered the ancient Hawaiian version of the Olympics and they were open to everyone. While games were practiced throughout the year, it was during Makihiki that competitors’ abilities were put to the test. The most physically demanding of the sports were the tournament games, including uma. Each district conducted these sports on special fields before large crowds of enthusiastic spectators. District champions would be invited to challenge the champions from other districts and often had stories and songs written in their honor. Like the Olympics, the Makihiki games encouraged good sportsmanship, friendly rivalries and gave people the opportunity to bring honour to their family and home district.

While the Makihiki games were practiced by ancient Hawaiians for several centuries, they were all but forgotten over the course of the 19th century. This was due to several factors, but it started with the arrival of the Europeans. Captain James Cook first reached the Isles in 1778 and within a few decades Kamehameha I (Kamehameha the Great) was able to unite the islands into the Kingdom of Hawaii with the help of European firearms and cannons by 1810. 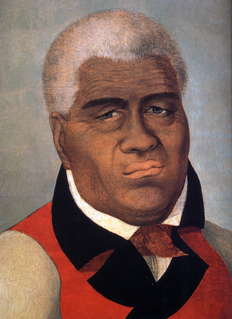 Kamehameha the Great
With the islands unified, there were no more wars, and thus there was no longer a need to train young men to be warriors through the promotion of sports. The abolishment of the kapu system by Kamehameha II in 1819 – the strict set or laws and restrictions described earlier – swept away the gods, temples, and consequently the religious ceremonies associated with the games. The Makihiki festivities were no longer a part of Hawaiian life.

Most of the Hawaiian games were replaced by European sports within a relatively short span of time. The Hawaiian people readily embraced the new culture introduced by foreigners, and with it, new sports; not necessarily because they felt they were better, but simply because they were different.

The continued loss of traditional Hawaiian culture was a major concern for King Kalakaua, who reigned from 1874 to 1891. To reverse the trend, he took several actions, including pushing for a revival of the traditional Hawaiian sports. Uma was one of the sports that was popularized greatly during this time. The King’s efforts led to a reawakening of Hawaiian pride and nationalism. 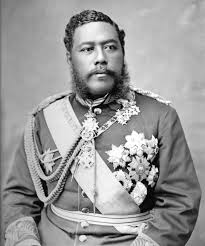 King Kalakaua
One of the days when uma competitions occasionally took place was on June 11, King Kamehameha Day. First observed in 1872, the purpose of the holiday was to honour the King who united the kingdom. Kamehameha the Great had been concerned with the loss of traditional Hawaiian culture he witnessed during his reign. As such, the holiday was celebrated through carnivals, fairs, and competitions that celebrated the ancient Hawaiian traditions.

By the early 20th century, uma was one of the few ancient sports that was still popular with both participants and onlookers. While official contests were sometimes held, the game was also practiced just for fun in casual settings. 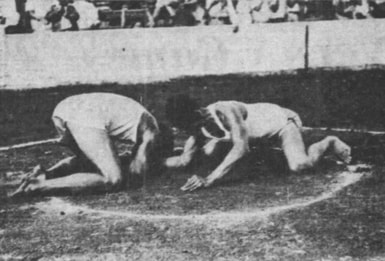 Match from a 1937 uma tournament
​In the 1950s, uma was being kept alive (along with other ancient Hawaiian games) by Donald Mitchell, an instructor at the Kamehameha School for Boys. His hobby was teaching students how the sports were meant to be played. Students could then demonstrate the games for tourists, pageants, and various ceremonies. 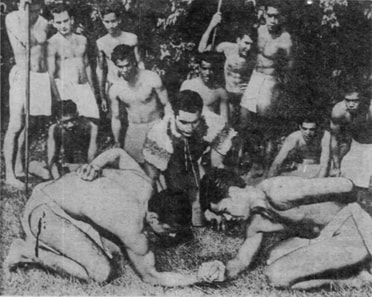 Students at the Kamehameha School for Boys giving a uma demonstration in 1954
When arm and wristwrestling tournaments started being organized in Hawaii around the 1970s, they overtook uma as the dominant forms of the sport. However, uma tournaments continue to occasionally be held to this day, often as part of annual Aloha Festivals which celebrate Hawaiian culture.

It is unclear exactly how the sport of armwrestling evolved and spread around the world. Some believe it must have first been developed by a single culture and then gradually spread, while others feel it probably developed independently in different parts of the world. Whether armwrestling has a single origin or multiple origins, one thing is known: one form of the sport has existed in Hawaii for a very long time.