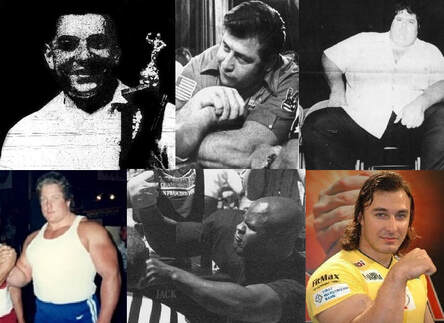 The pinnacle of the sport of armwrestling is the world’s overall #1 right hand ranking. Over the past 60 years, approximately 25 different men have arguably been able to reach this point. In some cases, the ranking switched hands following a very closely contested match. In others, the victory was secured through a decisive display of power. This article presents six such examples through history.
​ 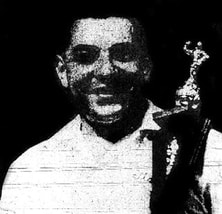 ​
​When Duane Benedix travelled to Petaluma in 1961 to compete in the annual March of Dimes Wristwrestling Contest for the California state wristwrestling title, be didn’t quite know what to expect. He knew he was strong, but hadn’t previously participated in an official tournament. You can imagine the joy he felt when he dethroned three-time champ Earl Hagerman to win the event. In 1962, the tournament was rebranded as the World’s Wristwrestling Championship and in turn it received broader media attention. Duane and Earl once again met in the finals of the single-elimination tournament. But this time, Earl got the jump off the start. Duane was able to slow the match down, but couldn’t overcome the initial surge. He came up just short in the first tournament to crown a world champion. Predictably, he wasn’t pleased with this result, especially because he felt he was the stronger man and and only lost because he miss-timed the start. In those days, the annual Petaluma tournament was practically the only tournament, so Mr. Benedix spent 12 months thinking about how he was going to take the title back. He built a wristwrestling table and trained regularly. When he returned, he once again met Earl in the finals. But this time, he wasn’t going to miss the start command. He won the match in dominating fashion, and then took a five-year break from pulling. He eventually returned to Petaluma for the 1968 and 1969 contests, which he easily won. In all, he is known to have competed in just five tournaments across eight years and suffered just a single loss. It was Bill Soberanes’ opinion (Bill being the co-founder of the World’s Wristwrestling Championship) that Duane “Tiny” Benedix may have been he best wristwrestler of all time.
​ 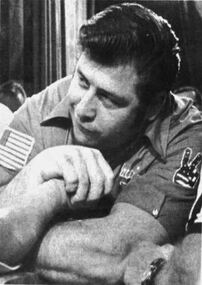 ​​When Maurice Baker first travelled to Petaluma in 1971 to take part in the World’s Wristwrestling Championship, he arrived with quite a reputation. He had established himself as the world’s best armwrestler, winning the IFAW World Armwrestling title three years in a row between 1968 and 1970. He had been armwrestling since he was a kid and had learned how to pull in the lumber camps where he worked growing up. Everyone was curious to see how he would match up against Jim Dolcini, who had won the world wristwrestling title in 1970 following Duane Benedix’ retirement. Sure enough, the pair met in the finals for all the marbles. The two men had different styles of pulling. Baker was known for his quick hit and favoured an outside move. Dolcini, on the other hand, was slower and relied on his tremendous defensive bicep lock to drain his opponents. When the “go” was given, Mo took off with his usual quickness, but in an apparent momentarily loss of concentration, he let up pressure just before getting the pin. This allowed Jim into the match, and his great endurance proved to be the deciding factor as be brought Mo’s arm back over for the win. The crowd went crazy, as Jim was a Petaluma native. The match was later broadcast on ABC’s Wide World of Sports, so Baker’s loss was seen by millions. He vowed to return to Petaluma the following year to redeem himself. He trained harder than ever, and when the time came, he showed up in Petaluma, and reached the finals to face Dolcini once again. Only this time, he didn’t make a mistake: he crunched down on Jim’s arm to claim the world wristwrestling title. Dolcini would later say that Mo was the toughest opponent he had ever faced.
​ 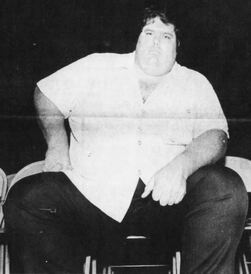 ​At a height of 6’7”, a weight of 400+ lbs, and a hand the size of a catcher’s mitt, Cleve Dean was built for armwrestling. He attained the world #1 ranking in less than one year and was the sport’s dominant figure in the late 1970s and early 1980s. But what’s interesting is that he didn’t train all that hard for the sport: he didn’t need to. He was a super-strong mountain of a man and wins just came easily to him. So when he took third place at the AWI Super Heavyweight World Championship in early 1982, he wasn’t exactly thrilled. On that day he lost to Virgil Arciero and Ed Arnold in much the same way. They both managed to force the match inside and it became an arm-to-arm battle where Cleve wasn’t able to use his huge hand. The matches were long, and eventually Cleve just ran out of gas. He decided that he wasn’t going to lose like that again: he cut back on his normally very busy tournament schedule for the remainder of the year and placed an increased emphasis on weight training. When he returned to the same tournament in January 1983, he was more physically impressive than ever. In a class that included Virgil, Ed, Scott Norton, Danny Stone, Johnny Walker, and many others, no one stood a chance against the big man. He easily beat everyone he faced, showing everyone that HE was the king. Cleve’s pulling career spanned close to 30 years (taking several breaks along the way) and some believe that his form at this particular event was his very peak.
​

​Scott Norton at the 1986 Over the Top World Championship 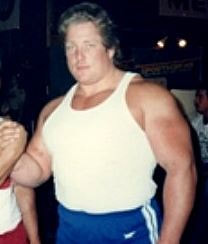 ​Scott Norton had wins on virtually all of the sport’s top super heavyweights in the early 1980s, but one person he could never manage to beat was Cleve Dean. They had pulled on several occasions: some of the matches appeared close, but in the end, Dean always came out on top. So when Over the Top was announced, he decided he was going to seize the opportunity to finally beat Cleve at the biggest tournament of all-time: the Over the Top World Championship. He became obsessed with this goal and trained full-time for several months leading up the tournament. On the big day he arrived in his most massive and strongest shape ever. He worked his was through the class, met Cleve in the finals, and smashed his hand to the pad for the win! Scott promptly retired from the sport following this event, leaving everyone to wonder: just how strong had he become?
​ 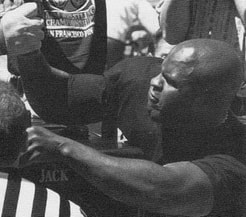 ​Canada’s Gary Goodridge came up in the sport during the same years as John Brzenk. He enjoyed occasional wins on Brzenk during this period, but John won most of their encounters. By the mid-90s, he had apparently had enough of playing second fiddle, so he made a serious effort to become the very best puller in the world. At the 1994 Yukon Jack World Championships, he had a chance to reach the top. He defeated John in a hard-fought match, but then Cleve Dean played the role of spoiler in the finals, defeating Gary twice in marathon sessions. Gary had come so close to winning the world’s top professional tournament, but had to settle for second. When he returned for the 1995 finals, the field was perhaps the strongest ever in the history of the Yukon Jack tournaments. Cleve Dean, Jerry Cadorette, Ron Bath, Zaur Tskadadze, Eric Woelfel, Garvin Lewis, and David Randall were all in the same class. Gary was determined that it would be his year. And he was right: he soundly defeated Cleve and every other puller he faced. He had conquered the sport! He won the 1996 tournament with ease as well before retiring from the sport to focus all of his attention on a new career in mixed martial arts. It’s difficult to estimate just how strong Gary was in 1995 and 1996, but one thing was clear: he was a step above the rest.
​ 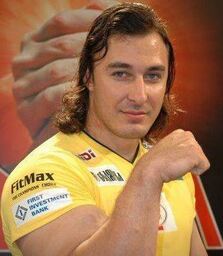 ​In the early 2000s, Russia’s Alexey Voevoda was a rising star in Europe. He was beating everyone, so by the time he made it to Canada for the WAF World Championships in December 2003, he was the heavy favourite to win the super heavyweight title. So when Travis Bagent beat him quickly in the finals, the loss did not sit well with him. But rather than sulk, he decided to turn his training into overdrive. He was determined to become the strongest armwrestler in history. He became laser-focussed on winning the 2004 Nemiroff World Cup (aka Zloty Tur), the biggest professional tournament of the era that would attract the sport’s super elite pullers. Both John Brzenk and Travis Bagent made the trip, but on this day, NO ONE was going to deny Alexey his victory. He won in convincing fashion before retiring shortly after to become a bobsledder on the Russian Olympic team.