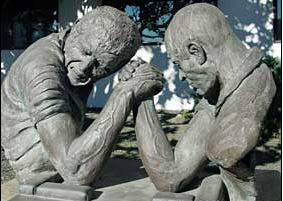 There are very few armwrestling statues on public display in the world. The most famous one is probably the wristwrestling statue in Petaluma, California, commemorating Bill Soberanes as the founder of organized wristwrestling. It’s been on display since 1988, just a block from where the first wristwrestling tournaments took place at Gilardi’s Corner. This is the story of how the statue came to be.
​
The Bill Soberanes wristwrestling statue wasn’t the first wristwrestling-related representation to dot the Petaluma landscape. A wooden Snoopy sign was erected on the same small strip of land on the northeast corner of the East Washington Street-Petaluma Boulevard intersection around 1971 announcing Petaluma as the home of the World’s Wristwrestling Championship. That sign was put up to recognize the impact that the Peanuts comic strip had on increasing public awareness of wristwrestling as a sport and of Petaluma as its birthplace. Charles Schulz penned an 11-strip story arc of the beloved beagle preparing to compete in the World’s Wristwrestling Championship. It was published in April 1968 and proved to have the biggest impact on helping to grow the tournament, until ABC started airing footage on television a couple years later. 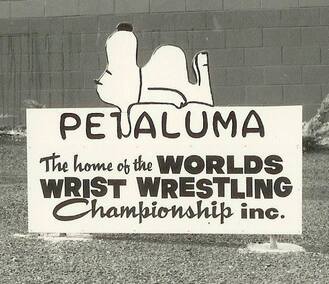 The original wooden Snoopy sign
With its wooden construction, the Snoopy sign was never considered to be a permanent landmark, and by 1977 some people, including mayor Helen Putnam, were already suggesting that it eventually be replaced by a statue of the beagle.

Though the idea was occasionally raised in the following years, not much was done until the sign started to show more evidence of wear by 1987. Bill Soberanes and Bill Rhodes, the 1971 lightweight world champion and active member of the Petaluma community, were among the biggest advocates for the installation of a new permanent statue. Their original idea was a granite pedestal with a bronze plaque on it, with a pair of hands locked in a wristwrestling grip and Snoopy on it. The monument could also be used to recognize the efforts of those who helped develop the sport in Petaluma.

Gradually, the focus of the statue changed to be more squarely on Bill Soberanes, rather than on Snoopy, to recognize him for his efforts to develop the Championship, which had grown to become the city’s biggest publicity generator. The Civic Tribute to Bill Soberanes Committee was formed, and approval for the statue from the Petaluma City Council was sought and received on June 20, 1988. The statue would stand approximately 5 feet high and 3 ½ feet wide, and would need to be funded entirely through private donations. A bronze sculpture of two men engaged in a wristwrestling match would sit atop a granite pedestal, embellished with a plaque featuring a likeness of Bill Soberanes and some text to describe a few of Bill’s major contributions. The sculpture would be made by local sculptor Rosa Estebanez, who had previously been commissioned to do similar projects for the city. The council’s only other stipulation was that the statue be movable, should improvements be required to the property or if the statue were ever to be moved to a different location.

One of the remaining hurdles was securing the close to $16,000 required to build and install the statue. But Mr. Soberanes’ great reputation, developed through decades of community involvement, made finding sponsors a snap. In fact, 18 local dairies each donated a calf for a livestock auction, with all proceeds going to the statue fund.
​
Bill Rhodes provided Rosa Estabanez with a picture of one of his wristwrestling matches (believed to be from the 1971 Championship and with an unidentified opponent) to serve as an example of what the sculpture could resemble. She decided to do a simplified version, leaving out the non-competing hands. 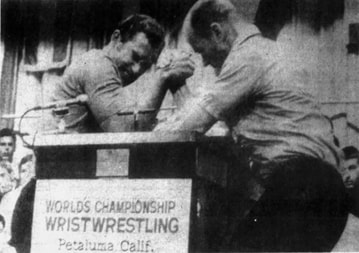 The picture upon which the sculpture is based
With funding secured, construction arrangements were made. Everyone worked toward the unveiling date of October 8, 1988, the day of the 1988 edition of the World’s Wristwrestling Championship. The project moved ahead on schedule.
In addition to the statue, it was decided that Bill Soberanes should be honoured with a special supper at the Veterans Memorial Auditorium (site of the annual championship) on the evening of Friday, October 7. This would allow 400+ people get together and officially thank him for his various contributions over the years. The special evening was attended by friends, relatives, politicians, entertainers, and various sports celebrities. World Wristwrestling Championship figures Jimmy Payne and Dave Devoto were just two of the many individuals who shared stories about Bill.

Saturday, October 8th, 1988, was declared “Bill Soberanes Day” by the city and a crowd of 150 gathered for the 12:30 PM unveiling. Bill received a big cheer when he was introduced, but he didn’t offer much by way of an acceptance speech, saying just “Thank you, thank you very much”. He then joined sculptor Rosa Estebanez to finally remove the brown tarp from the statue. The crowd let out a communal “Ooooh” while many pictures were taken. It was the first time Bill had seen the statue and he said that he thought it was wonderful and beyond his wildest expectations. 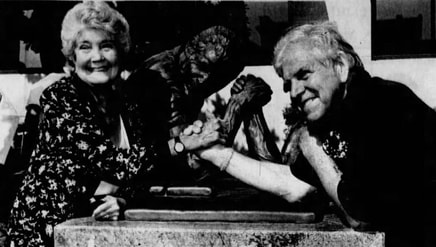 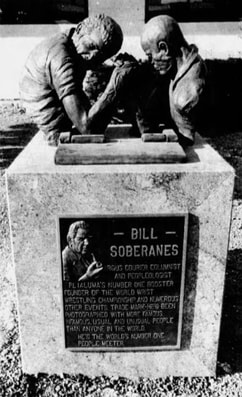 The finished product
Bill Rhodes, one of the key people involved in the project, had only one minor complaint about the statue. He felt Rosa made his arms too small! Rosa had a reason for this: she didn’t want kids who saw the sculpture to think that big arms were a requirement for wristwrestling.

You may be wondering whatever happened to the wooden Snoopy sign was removed when the statue was erected. It was given to Mr. Soberanes. In later years, he was approached by various collectors asking if he would sell the sign, but he considered it one of his prize possessions and refused to part with it.
​
The Bill Soberanes wristwrestling Statue remains in the same location more than 30 years later. The elements have caused some damage to the pedestal over time, and it has undergone some minor repairs. Armwrestling tournaments haven’t been held in Petaluma since 2002, but hopefully this statue will continue to be preserved for posterity so that everyone remembers that the town is the birthplace of organized armsports. Without Bill Soberanes’ efforts, it’s hard to imagine where armwrestling would be today. 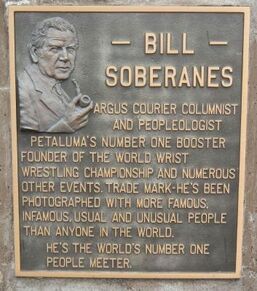 Close-up of the plaque