Legendary Powerlifters Who Could Also Pull

​When armwrestling first started to become organized in the US in the late 1960s and early 1970s, tournaments were often held in conjunction with powerlifting meets. Powerlifting, also a sport that was in its infancy, had no shortage of strong athletes, and not surprisingly, many decided to try their hand at armwrestling. In fact, some of the biggest names in powerlifting took part in armwrestling contests of the era and were successful in applying their tremendous strength to the armwrestling table. Here’s a look at a few of these men and their accomplishments in the sport. 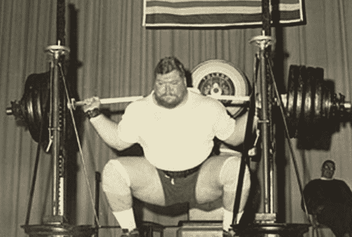 Terry Todd
​Terry Todd, winner of two National Powerlifting Championship titles in the super heavyweight division in the mid-1960s, is not known to have ever competed in an organized armwrestling tournament. The Texan did, however, did like to armwrestle for fun, and he even wrote a few articles about the sport in muscle magazines of the era. He was one of the first to write about the particular stresses that can occur in an armwrestling match and how spiral fractures were not rare occurrences. The match that would have brought him the most attention, but that didn’t occur, was with basketball legend Wilt Chamberlain. A $1,000 money match was in the process of being arranged between the two before Wilt’s coach and team physician had heard about it convinced the star player to back out because of the risk of injury. 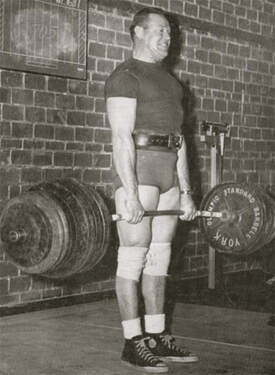 Wilbur Miller
​​Kansas’ Wilbur Miller competed and excelled in a variety of strength sports, including Olympic lifting and powerlifting. There’s even a story that says York Barbell had to move away from its deep-dished weightlifting plates to thinner ones because Wilbur couldn’t load enough of them on the bar! When an unsanctioned “world” armwrestling tournament was held in York, Pennsylvania, in the mid 1960s, he decided to see how his strength would transfer to that sport. He made it all the way to the finals, where he was defeated by Ben Jolley, the biggest of three armwrestling brothers from Elmira, New York.

​​Larry Pacifico is widely regarded as one of the best powerlifters of all time: he won nine world titles in a row between 1971 and 1979, at a time when there was just one powerlifting organization. But few know that the New York native competed one time in an armwrestling tournament. He entered the 200-lb class at the very first Mid-West Arm Wrestling Championship, held in Cincinnati, Ohio, in May 1969. By chance, it also happened to be the first tournament for future 1970s armwrestling star Lanny Julian. They met in the finals, where Larry came out on top after a hard-fought match. 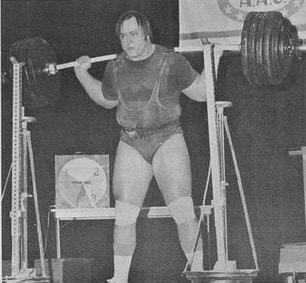 John Kuc
​​Pennsylvania’s John Kuc was a three-time world powerlifting champion during the 1970s and he once totalled a mind-boggling 2,350 lbs in official competition! He is also known to have competed in at least one armwrestling tournament, and it was a big one: the 1971 North American Armwrestling Championship in Scranton, Pennsylvania. No details are known about who he faced, but he won the super heavyweight title. One can only wonder how armwrestling strong he was and what he could have accomplished in the sport. 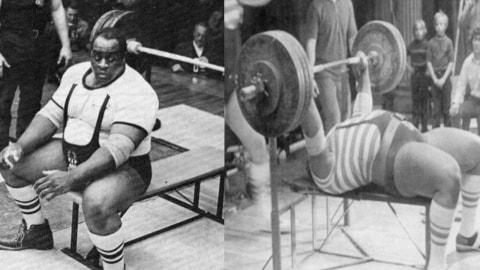 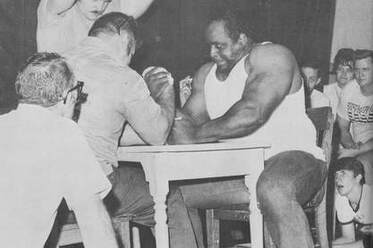 Maurice Baker and Jim Williams facing off in 1971
​​The most accomplished armwrestler of this group, Pennsylvania’s Big Jim Williams’ strength was simply amazing. In 1971, he broke the raw bench press world record by 20 lbs and raised it another 25 lbs later that year! A friend of Bob O’Leary’s, he was introduced to armwrestling at a local level around 1970 but no one could offer him any real competition. In 1971, Mr. O’Leary came up with the idea to pit Jim, the world bench press champion, against Maurice Baker, the reigning IFAW World Arm Wrestling Champion in a special 2-out-of-3 match. It would be the headline attraction of the North American Armwrestling Championships in Scranton. A full article about this historic encounter can be found here. Jim was able to make Moe sweat, and even won the first match on fouls. But Baker eventually emerged the victor with his world title intact. After the match Moe stated that he had never gripped up with someone as strong as Jim, and said that if Jim learned technique he would be unbeatable. High praise from the world’s #1 armwrestler! Jim competed in a few more tournaments in the early 1970s and won the super heavyweight title at the 1972 East Coast World Armwrestling Championships in Scranton.