A good year to have been a pro armwrestler! 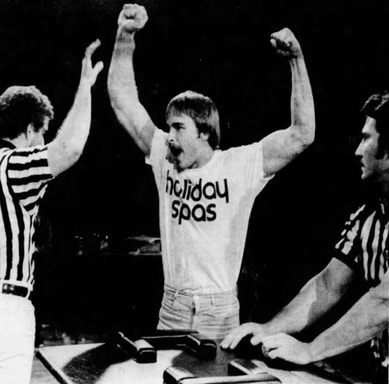 Dave Patton celebrating his victory at the World's Wristwrestling Championship
​​What do you think was the best year in history to be a pro armwrestler if your goal was purely to win prize money in tournaments? If your hunch is that it was quite recently, you would be right. In 2015, competing in only the big WAL tournaments, top pullers had the possibility of winning $66,000 if they took first place with both arms at the 2014 Championships (held in January), the 2015 Regionals, and the 2015 Championships. You would need to return all the way back to 1986 to find another tournament that paid comparable amounts (adjusted for inflation) in all classes. The Over the Top Championships paid $5,000 to class winners, and $10,000 to the super heavyweight champ class (not counting the semi-truck for the winner of the Truckers division). In each of these two years, a single source awarded the bulk of the prize money. But in terms of the overall number of organizations hosting pro tournaments with substantial cash prizes, one year stands above them all: 1981.

The late 1970s and early 1980s saw the emergence of several different armwrestling organizations, of which many had the common goal of bringing more prize money and exposure to the sport. They were undoubtedly inspired by the “big three” that successfully managed to attract the sport’s top pullers and get their events televised: the World’s Wristwrestling Championship (WWC), the World Professional Armwrestling Association (WPAA), and Arm Wrestling International (AWI). Some of these new organizations survived for decades while others only stuck around for a couple of years. But in 1981, they were almost all active, and in that particular year there were more major pro tournaments in North America than in any other year since.

None of the 1981 tournaments offered as much as Over the Top or the WAL, but together the prize money available to be won – in all classes – added up to north of $10,000, which when adjusted for inflation translates to approximately $30,000 in 2020 dollars. Top pullers had the potential to significantly supplement their income, particularly if they were motivated.

The first major tournament of 1981 was the Sands International Championships held in January in Reno, Nevada. In just its second year, Bob Howell’s event was already attracting top level talent from across the west coast. $700 was awarded to the class champs (representing about $2,000 today).

The next major tournament of the year, and also one of the biggest, was the AAA Stand-Up National Championships in April. In the ‘80s, the American Armwrestling Association (AAA) hosted two national championships each year: one for stand-up competition, and one for sit-down competition. The AAA Sit-Down Nationals never offered prize money, but the AAA Stand-Up Nationals sometimes did, and to this day the 1981 event offered the most thanks primarily to sponsor Jerry Herson. There were cash prizes for the top six finishers in each class (including $750 for all first place finishers), championship rings for class champions, and there was a draw among class champions for four paid trips to compete in the WAWF World Championships in Brazil later in the year! The tournament attracted 277 competitors.

The next big tournament was the International Wristwrestling Club (IWC) International Championships held in early May outside Chicago and organized by Maurice Rioux. It wasn’t just big: it offered the biggest cash prize purse in history up to that time - $33,750 in all! Aside from the huge cash prizes, what distinguished it from the rest of the organizations was that it was one of only a few that offered left hand pro classes. At that time, right-arm only tournaments were the norm, so the chance of making money with both arms was a big draw. Equal prize money was offered in all classes: left and right, men and women, from $750 for first down to $100 for sixth.

In late May there was the Carling O’Keefe World Championships in Timmins, Ontario. By this point it had become one of the longest running annual events and it always attracted high calibre pullers. All first-place champions got to walk away with $800.

Over the course of the year, Arm Wrestling International (AWI) hosted at least three tournaments in Nevada, two of which were held in the summer. AWI tournaments generally paid out significant sums (i.e. $1,500 to the champions), but only contested one or two classes per event. These contests were often held in conjunction with an armwrestling tournament for a professional team sport. 1981 saw AWI organize a tournament for NFL football players and another for NHL hockey players.

In late July, Pro-Arm Sports, a new promotion from Marvin Cohen, held its inaugural (and only) event:  the West Coast Armwrestlling Championship in Culver City, California. It featured a prize purse of $16,000, with money for the top four finishers in each class, including $1,000 for first, $750 for second, $500 for third, and $250 for fourth!

Another big tournament held in the summer of 1981 was the North American Championships in Amos, Quebec. $700 was awarded to every class champion. Though Amos could fairly be described as being located in the middle of nowhere, this didn’t distract from the tournament’s ability to attract strong talent. Massachusetts’s Dan Mason and Guy Lasorsa event made the long trek that year.

In early September, two World Championships were held. First up were the World Professional Wristwrestling Association (WPWA) Worlds in Georgia with $1,000 up for grabs for class champions, and a week later it was the World Professional Armwrestling Association (WPAA) Worlds in Kansas City, which offered several hundred dollars and prize packages to winners. If you ever wondered how some of the old-timers won so many “world” titles, it’s because at this time, seemingly ever promotion held its own “Worlds”. And with the exception of the WAWF, they were all held in North America.

Next up was the grand-daddy of tournaments: the World’s Wristwrestling Championship in Petaluma on October 10th. In 1981, the prize purse increased by 50% over the previous year, up to $1,500 for the heavyweight champion and $750 for other class champions. Get this: the tournament attracted 443 participants! And this was a right-arm-only single elimination event!

The final big money event of the year occurred in late October when the IWC hosted its World Championships. Once again, significant cash prizes were available to be won, though they weren’t quite as large as the ones given out at their International Championships earlier in the year. Nevertheless, cash was given down to fourth place in all right hand classes, with $500 going to the class champs.

With the major pro tournaments out of the way, one big tournament remained: the 1981 World Arm Wrestling Federation (WAWF) World Championships in Brazil. Many of the sport’s top pullers weren’t solely motivated by money and so several of the top American pullers made the trip, including Virginia’s Dave Patton, Georgia’s Johnny Walker, and Massachusetts’ Al Turner. Not surprisingly, all three took home gold medals.


He won eight world titles in a single year! Not bad for a 21-year-old! On top of all this, he also attended and won titles at a handful of slightly smaller events in 1981, including the Atlantic Coast Championships, the Northeast Championships, and the Mason-Dixon Championships (possibly even more).

Armwrestling organizations and events have come and gone over the years, but it truly must have been an amazing experience to have been a top puller in 1981!