​​In North America, armwrestling grew significantly during the 1970s. The decade saw tons of people enter the sport, and with this growth there was an emergence of a wide variety of pulling techniques. In the span of about 10 years, outside pulling (e.g. top rolling) went from being a technique that was used by just a few pullers, to one that was used by many. Unfortunately, along with the sport’s “evolution” came an increased jockeying for position in the initial grip. Matches that previously took no more than a few seconds to start now took up to several minutes to get going. Conversely, the average match length substantially decreased, with many top roll matches lasting a second or less. Also, with the increased popularity of the top roll came a huge increase in the number of matches where competitors’ hands slipped apart. Something that virtually never happened a decade earlier had become a common occurrence. These developments were bad for spectators – most fans prefer to see long and intense matches that are quick to set up, rather than matches that take minutes to get going and then are over within a second.

While the wider variety of techniques meant that strategy now played a more important role in winning matches, not everyone was thrilled with the direction in which the sport was going. Many of the pullers who had cut their teeth in the sport in the late 60s and early 70s longed for the days when two competitors would grip up fairly, and simply pull to see who was strongest: not who was fastest and who could find the best “trick” to win. Their belief was that armwrestling was first and foremost a strength sport.

One of men who felt strongly about this was “Apache” Dann Carr. Dann had been pulling since 1968 and had been one of the top super heavyweight pullers in the mid-to-late 70s. In March 1980, he attended the AAA Standing Nationals in Maryland, which was the biggest tournament held on the east coast up to that point in time. Almost all the era’s greats were in attendance. The evening before the tournament, he went to the annual meeting of the American Armwrestling Association (AAA), where he introduced his concept of a new form of armwrestling: one he dubbed Power Armwrestling. The biggest difference between power and regular armwrestling was that all matches started in a hook. Competitors would grip up in normal fashion, with wrists straight, and then the referee would turn the competitors’ hands into a hook position. Pullers had to stay in this position for the duration of the match – if their fingers started coming off the back of their opponent’s hand, an indication that they were transitioning to a top roll, they would be fouled.

Dann invited all the pullers in attendance at Nationals to the first big power tournament, to be held at Waterford Park (a thoroughbred racetrack in West Virginia) and sponsored by Busch Beer. At the conclusion of Nationals he gripped up with many of the competitors to demonstrate what power armwrestling was about so that they would know what to expect at the tournament. 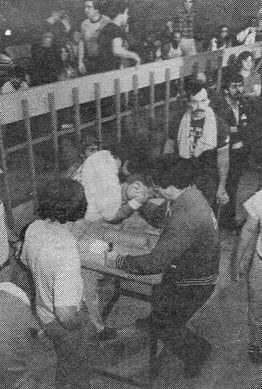 Dann Carr (left) demonstrating power armwrestling to Dan Mason at the 1980 AAA Standing Nationals.
​What was originally planned to be an open weight tournament ended up being more of a challenge in which Dann displayed his pulling prowess. The event, held in conjunction with Chuck Tanner Day festivities (Mr. Tanner having managed the Pittsburgh Pirates to a World Series Championship the prior year), was to have $500 up for grabs to the tournament winner. But at the last moment, when Chuck saw how big Dann was, he challenged him to beat all the pullers, one after another. If successful, Dann would win not only the $500, but an extra $500 as well. Normally Dann would have been confident that he’d be able to complete such a challenge, especially in the power style, but when Chuck introduced Dann on stage, he yanked on his arm suddenly with all his weight and caused a bicep tear. The injury prevented Dann from applying much side pressure, so he basically had to wait for his competitors to tire before he could bring them over. But somehow, he managed to go undefeated and beat all 44 challengers! Unfortunately, it would be a few years before his arm would fully recover… 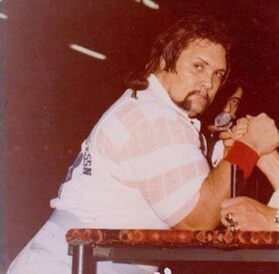 Dann Carr, moments before having his arm injured by Chuck Tanner.
​​Dann did not seek to replace armwrestling with power armwrestling: he just wanted it to be an optional format. In the way there is Olympic weightlifting (which requires a combination of strength and technique) and Powerlifting (which has a greater focus on pure strength), he felt there was also room for two types of armwrestling.

A firm supporter of the AAA and the World Arm Wrestling Federation (WAWF), Dann’s hope was for power armwrestling to be sanctioned by them. It turned out that Bob O’Leary, Chairman of the two organizations, also didn’t like what was happening with the sport and he was very supportive of the power style of armwrestling. He even published an editorial in the summer 1980 issue of the Arm Bender (the official journal of the WAWF) where he expounded on the positive aspects of power amwrestling and encouraged promoters to run power tournaments.

Dann was appointed National Chairman of Power Armwrestling, and with the support of the AAA, he was ready to officially start promoting the new format. In the summer of 1980, he hosted the Great Lakes Tournament – the first AAA-sanctioned tournament to use power rules. And to demonstrate the advantages of power over the regular style of pulling, he measured results: the average lock-up took ten seconds, the average match length was 16 seconds, and only four matches were over in less than five seconds. And not one slip grip happened in the entire tournament!

Based on the success of the first tournament, it wasn’t long before power contests started popping up all over Pennsylvania and the surrounding states. While Dann hosted many tournaments, other power armwrestling promoters included Pennsylvania’s “Chief Red Eagle” (John Aguilar) and Bob Stanger, and New Jersey’s Sampson Margolis and Pete Nistok. Even some of the most active promoters of regular armwrestling tournaments hosted some power events – men like Michigan’s Fred Wenk and Massachusetts’ Ed Jubinville.

While the Waterford Park tournament was considered the first National Power Armwrestling Championship, it wasn’t a sanctioned event per se. The next National Championship was sanctioned, and featured just two weight classes: up to 200 lbs, and over 200 lbs. It was held at Watkins Glen International Racetrack in New York. Once again, Dann entered and won the super heavyweight class.

The 1983 Power Armwrestling National Championship was held in Greensburg, PA, and for the first time the tournament was contested sitting down. It was also the first Nationals to offer several weight classes: six for men and two for women. Dann kept his streak alive, taking the 211 lbs + class.

For 1984, the Power Armwrestling National Championship was back to stand-up. And for the first time, Dann would not compete in the Power Nationals, as he was recovering from blood clots. The contest results served to demonstrate that the best pullers in straight-wrist armwrestling were not necessarily also the best at power armwrestling. Jim Northern had recently won AAA National titles in both stand-up and sit-down styles, but he could not lay down Andy Wohl’s stubborn arm in power style. Dann had a saying to describe the power armwrestling: “Who’s strongest the longest?” 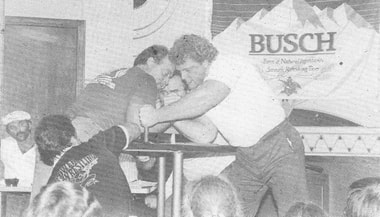 Jim Northern (left) and Andy Wohl in the super heavyweight finals of the 1984 Power Nationals. 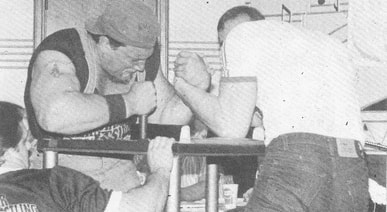 Don Plonski (left) and Jim Walkiewicz in the left hand finals of the 1984 Power Nationals. 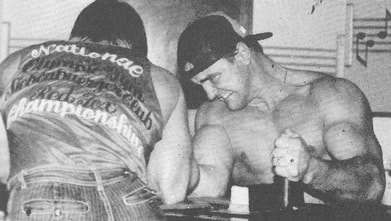 Dave Sherwood (left) about to defeat John Heynoski to take the 175-lb class at the 1984 Power Nationals. 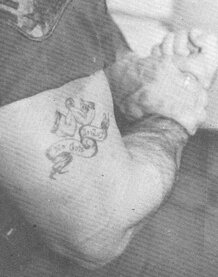 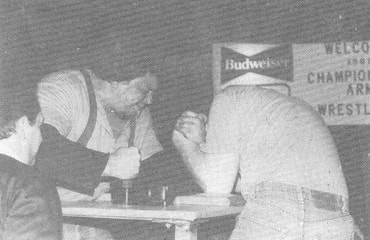 Don Plonski (left) and Jim Walkiewicz once again in the left hand finals of the Power Nationals. 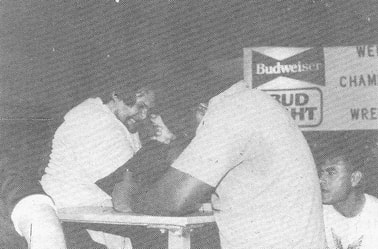 Dann Carr about to win yet another Power National title, this time over New Mexico's Tony McClelland. 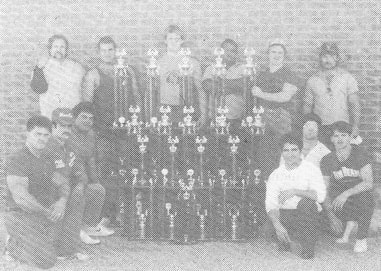 Trophy winners of the 1985 Power Nationals.
​​The popularity of power armwrestling waned in the late ‘80s, in part because Dann’s time became consumed in developing a new reality television series: American Gladiators. Despite this, he still went on to hold several power tournaments straight through to 1994, at which point he moved to Florida.

While power armwrestling tournaments may not have been for everyone, Dann is proud to have developed a variation of the sport that was more likely to result in faster grip-ups, longer matches, and was better for both new pullers who did not yet have much technique as well as older pullers who weren’t quite as fast off the go as they once were. Not everybody loved power armwrestling, but there’s no arguing that it offered several advantages over standard tournaments, and it provided some competitors – who otherwise may have gone unnoticed in a regular tournament – with a chance to shine.

Special thanks to Dann Carr, without who help this article would not have been possible.