​Pulling for the fun of it:
The History of the World National Wristwrestling Association

​This is a story about the Midwest-based World National Wristwrestling Association (WNWA), an organization that has operated independently since its inception. Some independent promoters hold one or two events and then disappear forever. Others manage to stick around for a couple of years. And only a select few survive for 10 years or more. The most prolific of these is undoubtedly Iowa’s Jerry Halverson who has been operating the WNWA for five decades. The organization has a limited social media presence, so many may be surprised to learn that the WNWA has run literally thousands of tournaments.

Jerry’s journey into the world of arm sports can be traced back to when he served in the Marines during the Vietnam War in the late 1960s. He liked to test himself against his fellow servicemen and was seldom defeated. Regrettably, he was eventually injured in combat and lost partial use of his left arm. Upon his return home to Iowa, Jerry was in search of an athletic pursuit. He started entering local armwrestling tournaments. The sport seemed like a perfect match for him because only the right arm was contested at the time, so he was in no way handicapped by the limited use of his left.

Jerry Halverson (late 1960s)
​​After competing in a number of local contests, Jerry ventured down to Kansas City for a bigger event and won. Unfortunately, some of the guys weren’t very happy about this and they jumped him after the tournament. In addition to bruises, it left him with a bad taste in his mouth. He liked to armwrestle, but felt it was taken too seriously by some competitors. He wanted to enjoy himself through physical competition – not to get beat up by sore losers. He figured there had to be a better way.

Inspired by the World’s Wristwrestling Championship, which he attended in 1974, Jerry decided to host his own wristwrestling tournament in August 1975. He called it the Midwest Open Wristwrestling Championships and held it in Marshalltown, Iowa. He used the same weight classes as the ones in Petaluma, plus added one other for men over 250 lbs. He worked hard to find various prize sponsors and to promote the tournament via the local media. The event was offering trophies for the top five finishers in each class, plus a case of beer, dinner for two, and an overnight stay at a local hotel for the class champions. Despite all this, the turnout was much lower than expected – although there were about 200 spectators, there were only about 40 people who entered the tournament. 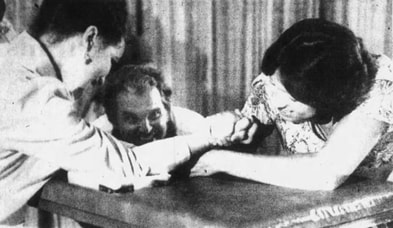 A match from the first wristwrestling tournament held by Jerry Halverson - the 1975 Midwest Open Wristwrestling Championships
While not a huge success, the tournament did convince Mr. Halverson that wristwrestling was a sport with potential. Most who tried it enjoyed their experience and the crowd liked cheering on their favourite competitors. Jerry wanted to see what he could do so he soon started holding events in small-town bars all across Iowa.

In running so many events, Jerry was able to learn what worked and what didn’t and continually made minor changes to improve his offering. Some of these changes included the addition of more weight classes for both men and women and featuring left hand classes (which were a rarity at the time).

1976 saw Jerry move to Wisconsin to raise his family and in turn the state quickly became a hotbed of wristwrestling. The move also led him to securing Milwaukee-based Pabst Blue Ribbon as a sponsor. The brewery helped promote his tournaments and also provided Jerry with leads for potential venues. 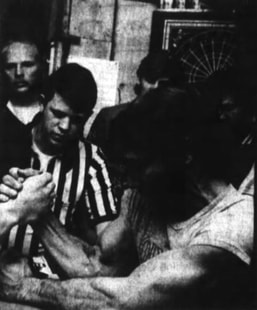 Jerry Halverson refereeing a match in a 1977 tournament
​Early on, Jerry ran all the Midwest Wristwrestling Association events, but it wasn’t long before the number of venues that wanted tournaments exceeded his ability to travel and host them. So he began recruiting people to promote events in different regions. By 1977, events were being held in more than a half-dozen states. This rapid expansion led to a change to the organization’s name: it became United States Wristwrestling Matches (or United States Wristwrestling Association). 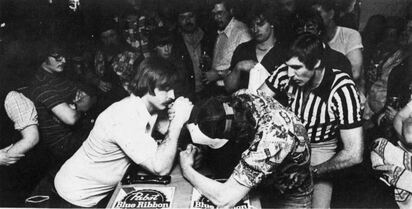 A match from a tournament held in Marshfield, Wisconsin, in 1979. The referee and promoter was Dan Jazeski.
​The Midwest Open Wristwrestling Championships, Jerry’s biggest event in the early days, grew each year. The 1977 tournament, held in October in Rockford, Illinois, attracted nearly 100 pullers from Iowa, Wisconsin, Indiana, Illinois, and Minnesota. Jerry decided the time was right for an even bigger event, so in December 1977 the inaugural USWA Nationals were held in Waukesha, Wisconsin.
Jerry and the other promoters of the USWA arranged the event schedule so that local events qualified pullers for regional and/or state championships, which in turn served as qualifiers for the Nationals. The USWA was also one of the first organizations to push the team aspect of pulling. Clubs were encouraged to register with the Association so that their members could earn points throughout the year via their participation and performances in tournaments. By the end of the decade, there were literally hundreds of events being held across the Midwest each year.

One of the early strong teams was McHenry Recreation, headed by John Brzenk Sr. When the Nationals came to McHenry, Illinois in December 1978, the team did very well. The team’s top pullers, in addition to John, were his sister Fran Brzenk, Chris Glus, John Bassi, and Jimmy Lawrence. The team was once again one of the favourites at the 1979 Nationals, which had returned to Wisconsin.
There were a few things that set the USWA apart from any of the other armwrestling organizations of the era. One is that the USWA held many, many local events. These events weren’t relegated to Saturdays – they were often held on weeknights. Turnouts were rarely huge, but the events developed a following of dedicated pullers. The tournaments were social gatherings as much as they were sporting events. Of course, people wanted to win, but the main focus was on everyone having fun. Consequently, Jerry, as well as the other USWA promoters, tended to keep things relatively light-hearted. Good sportsmanship was particularly emphasized.

The 1980s saw the USWA branch out even further, both in terms of geography and in types of venues. While the Midwest always remained the centre of activity, Jerry travelled all over the country to host tournaments. Events were also increasingly being held in non-bar locations, including in fairs, festivals, universities, steakhouses, etc. 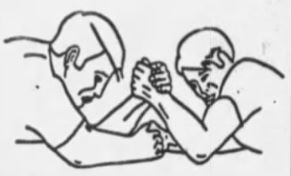 The logo designed by Jerry Halverson. Note that the competitor on the right has five fingers on his left hand in addition to a thumb. This was done on purpose, so that he could easily identify anyone who tried to steal the logo for their purposes.
Jerry was often approached by different armwrestling organizations asking if he would be willing to join them. One of the earliest was the World Monster Association (WMA), which ran tournaments using the Monster Armwrestling Machine. The WMA operated using a very similar model to the USWA’s, in many of the same areas. But Jerry didn’t get the appeal of the machine. Plus, he had been successfully running tournaments before Monster came along, so he didn’t see much benefit. Similarly, he didn’t see the need to have his events sanctioned by any other armwrestling organization. He liked the fact that he could do whatever he wanted, and the idea of having to change anything to align with another group held zero allure.

The Nationals continued to be the biggest annual USWA event right through to the mid-‘90s. Along the way, the organization changed its name again around 1988, this time to the World National Amateur Wristwrestling Association. “World” was more technically correct because by that time Jerry had travelled to Canada, Mexico, and Japan to run events. And “Amateur” acknowledged that competitors never competed for money in the organization’s events.

Attendance at Nationals ballooned during the 1980s and early 1990s to where there were sometimes close to 500 competitors, and four to six tables were required to run simultaneously over an entire weekend. The Nationals often moved to different cities, but they were almost always held somewhere in Wisconsin. 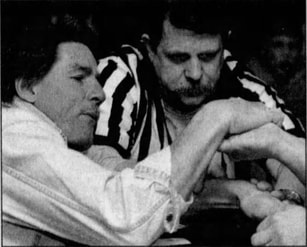 Jerry Halverson overseeing a match in 2003
In 1995, the World National Amateur Wristwrestling Association changed its name on final time. It dropped “Amateur” and became the World National Wristwrestling Association, which is the name that is still used today. The year also saw the organization hold its first World Championship. A World Open event was held in Davenport, Iowa, in March, and a second one was held in December. From that point onwards, the Worlds were generally held in November or December each year.

The 2000s saw a reduction in the number of WNWA events held annually. There were still over a hundred tournaments, but this was down from several hundred a year during the 1980s. The 2010s saw an even greater decline. By 2014, approximately 40 events were held, and by the end of the decade there were only about a dozen. However, the WNWA continues to operate, and while Jerry has taken a bit of a step back in recent years, promoters like Sam Rucker from Illinois, Doug Oswald from Iowa, and Wisconsin's Corey Shebesta continue to help keep things going. Corey also manages the organization’s Facebook page, which is used to announce all WNWA events. 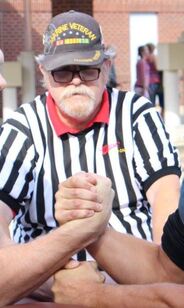 Jerry Halverson officiating a match in 2016 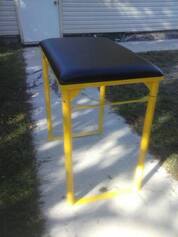 An example of the table that has been used in recent years. The elbow cups were removed because they were believed to have a greater chance of leading to injuries. Tape, or simply a marking is used to identify where the competing elbows must be placed.
What Jerry Halverson accomplished over the past 45 years is simply amazing. He personally ran an estimated 3,000 wristwrestling events, while thousands more were run under the WNWA banner. At his peak, Jerry was running close to 200 events a year, at one point organizing up to 12 in a single week! In the US, he ran tournaments as far east as New York and New Jersey and as far west as Washington and Oregon. He was able to do all of this his way, and this served him well. He built up a dedicated following: some pullers and promoters have stood by him for decades and became lifelong friends. And the great people he met along the way is the main reason he never stopped.

Special thanks to Jerry Halverson and Corey Shebesta for granting interviews