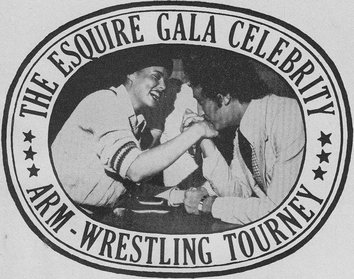 In the spring of 1975, Esquire magazine was in the process of putting together its second Super Sports issue. At the time, wristwrestling was receiving good ratings whenever it aired on ABC’s Wide World of Sports. So to announce the upcoming issue, the magazine decided to organize a special celebrity wristwrestling tournament. To add some credibility to the event, they reached out to the Petaluma-based World’s Wristwsrestling Championship Association and invited Bill Soberanes, the sport’s founder, to oversee the proceedings. Mr. Soberanes brought along reigning heavyweight world champion Jim Dolcini to officiate.

Esquire sent out invitations for the contest and a handful of people in the entertainment industry agreed to take part. There was an open weight men’s division and an open weight women’s division. It was a single elimination tournament, using wristwrestling rules.

Some of the women who took part included:


The eventual winner was the 6’ tall 21-year-old Margaux Hemingway. She beat Pat Loud in the final. 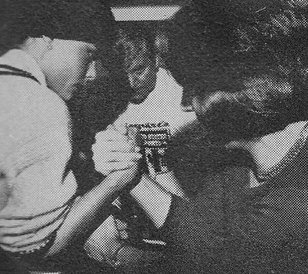 The women's final. Margaux Hemingway on the left, Pat Loud on the right.
Some of the men who took part in the tournament included:


An early surprise saw Peter Boyle quickly pin 6’6” Geoffrey Holder. While Peter was by no means a small man, most expected Geoffrey’s long arm and large hands to be enough to ensure a win. Peter won his second round match against Mac Davis but then faced Geraldo Rivera in the semi-finals, who proved to be too strong of an opponent. The finals saw Mr. Rivera face off against Mr. Wetanson (who had downed the arm of Dennis Wayne in the semis). The young reporter wasn't able to overcome the burger king, who was declared the winner of the men’s division. 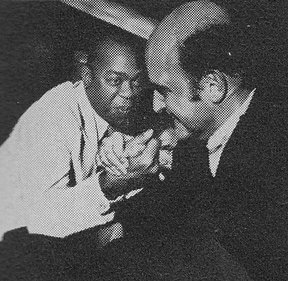 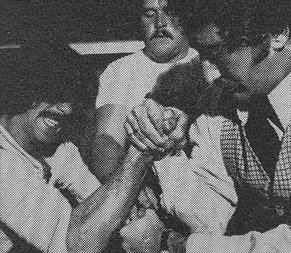 Geraldo Rivera (left) about to be defeated by Errol Wetanson 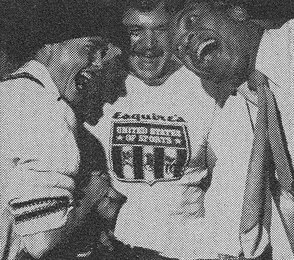 Following the contest, everyone stuck around to enjoy the party and the wine flowed freely. The Esquire Gala Celebrity Mixed Invitational Arm-Wrestling Tourney was a one-time affair and I’m not surprised that it took place in the ‘70s, one of the wackiest decades of the 20th century.