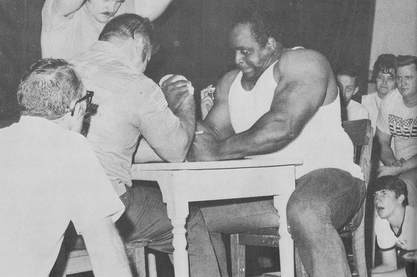 In the early 1970s, there was no doubt about it: on the east coast, Maurice “Moe” Baker was the man to beat in armwrestling.

Moe got his first taste of armwrestling while working as a part-time lumberjack’s assistant in New Hampshire lumber camps between the ages of 10 and 15 to help earn money for his family. A popular pastime among the old-timers, Moe had plenty of opportunities to pull. They loved nothing more than to let young Moe pull on their arms until he gave up, all the while taunting him throughout the proceedings. Moe hardly ever won against them, but he did learn how to toproll and this became his preferred pulling style.

He left the lumber camps to join the Army’s 82nd Airborne Division at the age of 17, and was suddenly surrounded by plenty of young men his age and he soon discovered he was by far the best puller of the lot. When he got out of the service three years later, he paid a visit to the lumber camps and sought out the men he could never beat just a few years prior. Moe was no longer a teenager – he had become a man and could now beat every single one of them!

After a short stint as a police officer in Manchester, New Hampshire, Moe moved to Bristol, Connecticut to work in a hot steel forge for General Motors. It was hard work that required constant use of his hands and wrists. He never lifted weights to become strong: he didn’t need to.

3,000 men worked at the GM plant, and not one of them could beat Moe in armwrestling. In 1968, a co-worker came across an ad in a muscle magazine about an upcoming World Arm Wrestling Championship, to be held at the Brooklyn Academy of Music in conjunction with the Mr. Olympia bodybuilding contest. The co-worker egged Moe on by saying “If you’re so good, why don’t you go to this contest and show everyone”. So on September 21st of that year, he travelled to Brooklyn and proceeded to flash all of his opponents to win the world title, in what was his first official tournament.

He returned to successfully defend his International Federation of Arm Wrestlers (IFAW) world title in 1969 and 1970. The contest was not held in 1971 (the Mr. Olympia contest moved to Paris that year), but another major Armwrestling Championship was in the process of being organized by Bob O’Leary in Scranton, Pennsylvania.

Mr. O’Leary owned a sports nutrition distribution company and was involved in the organization of bodybuilding and powerlifting contests. A fan of armwrestling since learning about it during his time in the Navy, he began organizing small local tournaments in the late ‘60s. Having witnessed the IFAW tournaments first-hand (which had recently been discontinued) and seeing coverage of the World’s Wrestling Championship on TV, he decided there was a good opportunity to start a new major armwrestling championship. He preferred seated competition, because he felt it accentuated the need for arm strength and took away some of the more ‘questionable’ techniques he felt could be used with a stand-up table (e.g. getting one’s shoulder completely behind their hand, leaning all the way back under the table, etc.).

In mid-1971, while finalizing the details of his inaugural North American Armwrestling Championship (euphemistically referred to as the World Armwrestling Championship), Bob was looking for a main event: something that would really drum up interest in the tournament. He came up with the idea to have a special two-out-of-three challenge match between Moe Baker and champion powerlifter and world-record bench presser Jim Williams. Williams, who lived in Scranton, was quite popular, and such a match was sure to attract local interest.

To say Jim Williams was strong would be an understatement. At 6’1” tall and 335 lbs, he was an imposing figure and his bench pressing prowess was absolutely incredible. He beat the competition raw bench press world record by 20 lbs in 1971 with a lift of 635 lbs. Later that year he would go on to best his own record by an additional 26 lbs and become the first person to press 300 kg!

When Bob contacted Moe to talk about his idea, Moe didn’t understand why the match would be interesting. He asked Bob about the armwrestling competitions in which Jim had taken part, and Bob replied that he had only done a bit of pulling locally. Moe didn’t see how it could possibly be an entertaining match, considering his the large gap in armwrestling credentials. Bob replied that he just felt it would be a good match – and that an 8-foot trophy would be awarded to the winner. That was enough to convince Moe.

Jim, on the other hand, didn’t need much convincing. He was good friends with Bob, wouldn’t need to travel, and could potentially take the super heavyweight world armwrestling title from Baker. It was a great opportunity. 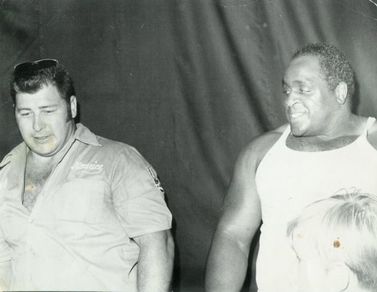 265-lb Moe Baker and 335-lb Jim Williams
On the day of the contest (August 14th), Moe arrived on his motorcycle, which he had driven the nearly 200 miles from his home in Connecticut. The armwrestling tournament had attracted quite a few pullers and spectators, and by the time Baker arrived there wasn’t much parking left near the venue (the Greater Scranton YMCA in Dunmore). So Moe just parked his motorcycle on the front steps. He was certainly a character. When he entered the building he saw Bob, came up behind him, and gave his traps a good squeeze to say hello. Let’s just say it wasn’t a very gentle squeeze – Bob was sore for days.

Moe told Bob he was ready to get the show on the road, but was informed he’d have to wait awhile – the special match would only be held at the conclusion of the tournament and there was still many matches to go.

In the minutes leading up to the main event, Moe was his usual cool self, whereas Jim was pacing. He reportedly exclaimed that he was about to “beat the world champ and take his crown”, but this didn’t seem to faze Moe.

The matches were contested sitting down, however a wristwrestling set up was used (the pegged table would only be introduced the following year). The wooden table didn’t have elbow pads. It was the same set up that was used in the IFAW events, and both Moe and Jim were familiar with it.

It was finally time. The competitors gripped up, and once the start command was given, there was a struggle. Before long, Moe was fouled out for lifting his feet off the ground – something that was expressly forbidden. The score was 1-0 for Jim.

In the second match, there was once again a struggle and this time Big Jim fouled out for lifting his elbow. The score was now 1-1 despite no pins having yet occurred.

​In the final and deciding match, Moe was able to pull back Jim’s hand and pin him for the overall victory. 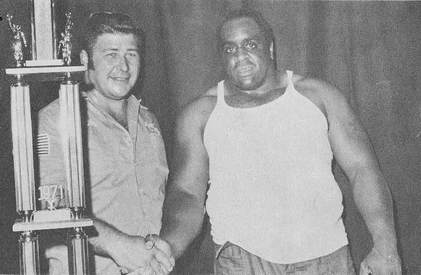 Jim Williams congratulating Moe Baker on his win.
​Most of the spectators in attendance were Williams supporters – they knew all about how strong Jim was, but knew very little about the much smaller Moe (5’10” and 265 lbs – but with a 9.5” wrist!). This explains why so many in attendance were shocked by the contest’s result. And from the look on Jim’s face, he was shocked as well. He had never pulled someone with such big wrists and with hands equal in size to his.

Following the match, Moe was very complimentary towards his opponent, stating that he was the strongest man he had ever pulled. He added that if Jim was to learn armwrestling technique, he’d be unstoppable. These were big words coming from the world champ.

At the end of the event, Moe had a small problem: how to get his 8-foot trophy home. But somehow he managed to strap it to his motorcycle for the trek back to Connecticut. It must have been quite a sight!

Bob O’Leary’s hunch turned out to be correct: Moe Baker vs. Jim Williams proved to be one heck of a match!

Special thanks to Bob O’Leary, Maurice Baker, and Jimmy Van Orden, who all granted the author interviews.