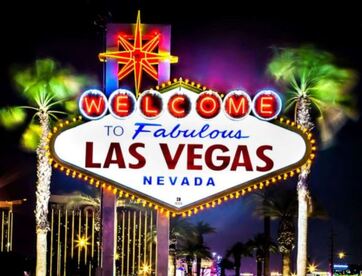 ​Throughout organized armwrestling’s history no city has been host to more major events, from a variety of different organizations, than Las Vegas, Nevada. Since the 1970s, major promoters have selected it time and time again to put on their biggest shows. The following list presents the top 10 armwrestling tournaments ever held in Sin City, based on a consideration of factors such as prize money, the size and depth of the competitor fields, and the overall level of excitement leading up to and at the event. If you attended any of these, consider yourselves lucky, because all of them were amazing.
​ 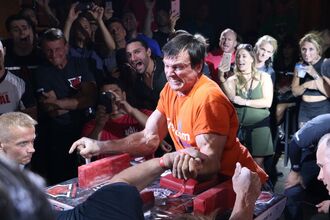 The 2017 World Armwrestling Leage (WAL) Championships may not have unfolded in the manner that was originally planned, but it was still an event that warrants inclusion in this list. Two weeks before the event date, the WAL made the difficult decision to cancel the tournament due to a series of critical partnership deals that didn’t come together in time. However, less than 24 hours after the announcement, the decision was reversed: the tournament would go ahead but would not be televised and the prize purse would be drastically reduced (from $236,000 to $11,000). While many pullers were relieved that the event would at least go on, some decided to stay home. Nonetheless, the fields were still very deep with talent, amazing matches were had, and the atmosphere was fantastic. 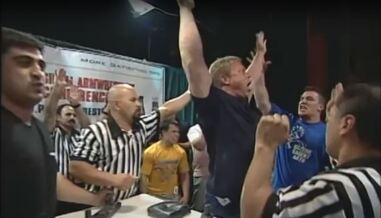 Turnout for the pro classes of John Burgeson’s third annual Ultimate Armwrestling Las Vegas tournament was a bit of a disappointment in terms of overall numbers, but the calibre of competition more than made up for the limited entries. Approximately 10 countries were represented by some of their very best armwrestlers, giving the crowd a chance to see some amazing, even historic, pulls. 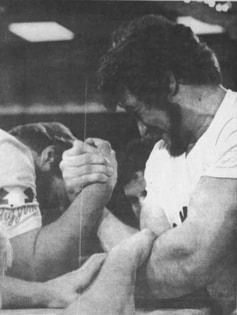 In 1974, the World’s Wristwrestling Championship (WWC) Inc. decided to expand by adding an annual National Championship. Like its flagship World Championship in Petaluma, the WWC Nationals would also be filmed by ABC’s Wide World of Sports. And what city would be a better host to make the inaugural event a splash than Las Vegas? The tournament was held in the ballroom of the MGM Grand Hotel. Turnout was huge for this five-weight-class (four for the men, one for the women), single-elimination event: in all, there were 277 entries! The tournament also saw the return of Jim Dolcini, who had to sit out the 1973 World Championship because he was recovering from an injury sustained in a bar fight. A New York Times reporter, who covered the event, had this to say about the tournament: “I came with mixed emotions, and I left realizing I had just seen one of the most exciting sports events in the world.” 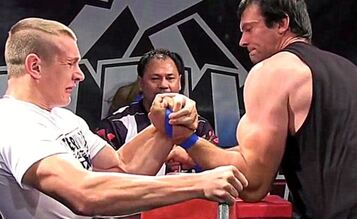 The big event of the summer of 2013 was supposed to be the World Bar Armwrestling Championships: a tournament that was to have more than $100,000 in prize money. But at the last minute, literally three days before the date of the event, it was cancelled due to sponsorship falling through. The cancellation happened so close to the date that several international pullers were already on their way to Vegas. Luckily, Robert Drenk and the Ultimate Armwrestling League stepped in and in less than 72 hours put together a replacement event: UAL IV. They even honoured the World Bar weight classes, so that pullers would be able to pull in their intended classes. In fact, they went above and beyond by adding a fourth left hand class for the men. While the cash prizes paid out were just a fraction of what was announced for the World Bar Championships, the top pullers were still able to leave with a little something. The UAL even added a few of their own touches, including 2 out of 3 right and left supermatches between John Brzenk and Marcio Barboza as well as free live streaming for fans around the globe. And at the conclusion of the tournament Robert surprised everyone by offering $5,000 to the winner of a 3 out of 5 left hand supermatch between Devon Larratt and Oleg Zhokh! 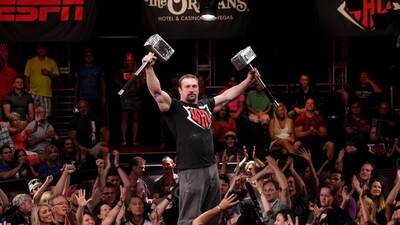 The 2016 WAL Championships featured the top 12 competitors in each class from the Northern and Southern Regional Championships, as well as a smattering of top international athletes. As with all WAL major events, the talent was exceptional, with the majority of North America’s top pullers in attendance. While the prize money was down from the previous year, it was still the second biggest prize money tournament of all time, with $10,000 for the champion of each men’s classes and cash prizes down to eighth place. A new addition was the WAL Amateur Championships, which took place on the Friday evening and was very well attended. Footage from the latter stages of the pro classes were filmed and aired on ESPN2 and eventually on stations around the world. 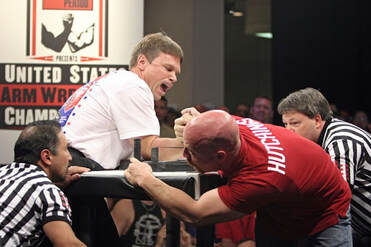 Following the success of the inaugural Ultimate Armwrestling Las Vegas event in 2004, John Burgeson decided to kick things up a notch by teaming up with Dave Devoto to put on North America’s biggest pro tournament of the decade. Alternatively known as “The Pull at the Plaza” and the “United States Armwrestling Championships” for television purposes, the event attracted pullers from far and wide. Roman Tsindeliani, Engin Terzi, Cvetan Gashevski, Andreas Rundstrom, Pascal Girard, Neil Pickup, Farid Usmanov, Malin Bergstrom, and August Smisl were just some of the pullers who crossed the Atlantic to participate. The tournament benefitted from the double-whammy of coverage provided by Gary Roberts’ ArmTV and Fox Sports Net’s “Best Damn Sports Show Period”. An event of this scale hadn’t been organized since the Main Event tournaments in Idaho in the late 1990s, and it was clear that many pullers were really looking forward to it by the fact that they turned out in droves. 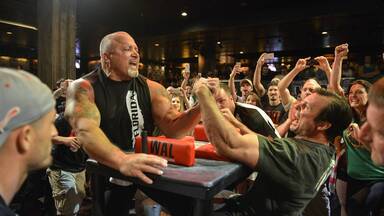 Following its inaugural event in Columbus, Ohio, in March 2014, the World Armwrestling League stepped things for its second event. Big time armwrestling was coming back to Sin City, and the WAL wanted to make a splash. Almost $30,000 in prize money was up for grabs, but what really helped attract pullers was the fact that AMC’s Game of Arms was going to be interviewing pullers for potential casting in the show’s second season. Turnout was huge: the right-hand 195-lb class alone had 55 pullers. The downside was that because there were so many competitors, the tournament had to be run in two separate areas of the venue so it was impossible to catch all of the action. Nevertheless, the atmosphere was electric. Those in attendance seemed to share a common feeling that the sport was on the cusp of something big, and when the tournament was capped off with a surprise draw for a Victory Motorcycle, the excitement level went through the roof! 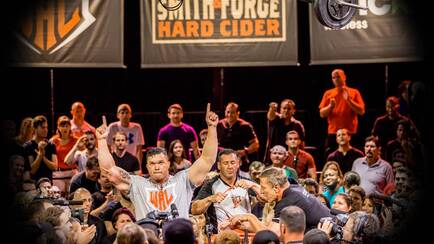 What better way to celebrate the Fourth of July than with the biggest cash prize tournament of all time! The 2015 WAL Championships assembled the top six finishers in each class from the three Regional Championships held just five weeks prior. The WAL pulled out all the stops for this event, including offering a mind-boggling cash prize purse of $308,000, with $20,000 going to the winners of each class and money down to eighth place. With 18 athletes in each class, the competition proved to be exceptionally tight, with no one claiming victory with both arms. All of the action was captured for airing on ESPN2 and those in attendance knew they were taking part in a historic event. 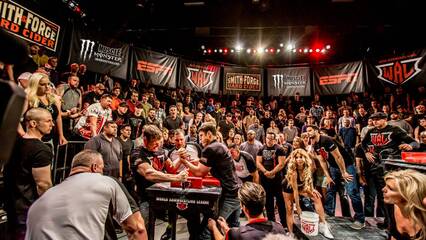 To qualify athletes for its 2015 Championships, the WAL came up with the novel idea to hold three separate Regional Championships over the same weekend in the same location: Las Vegas! So while technically the 2015 WAL Regionals were three tournaments, it had the overall feel of a huge one, with the added bonus of 24 pullers winning cash in each class instead of 8. With so many pullers having a chance to win money (total prize purse of $225,000) and with Las Vegas being the location, it’s no wonder the event attracted the largest gathering of North American pullers in almost 30 years, with nearly 400 individual pullers in attendance. Eight armwrestling tables were required to run the preliminary rounds to whittle the fields down to the top eight in each class, who then went on to pull in the “pit” for the cash prizes and the Championship qualification spots. The top six pullers in each class in each region qualified to compete in the 2015 Championships, and even received a $500 travel stipend to help make the trip! The production value was through the roof, and a show dedicated to action from the Regionals aired on ESPN2. The feeling that the sport was on the verge of something big was palpable. Armwrestling’s future looked bright!

​#1 – Over the Top World Championship 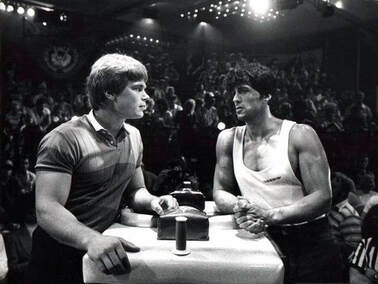 Not only is the Over the Top World Championship the best Las Vegas tournament of all time – it is regarded by many as the best armwrestling ever, anywhere! Certainly, its impact on the sport is second to none. Aside from the $57,000 in cash, it also offered more than $200,000 in other prizes, including a Volvo White tractor-trailer – which is still the biggest prize ever awarded in the sport of armwrestling. The tournament was the culmination of an almost year-long series of events held around the globe where the top four finishers in each event were invited to compete. Virtually all of the top competitors of the era were in attendance: more than 700 pullers in total! Many of the pro division classes had close to 100 athletes. Everyone wanted their shot at the money and a chance at a cameo in the Sylvester Stallone film. Eight tables were set up for use in the preliminary rounds, but there were frequent interruptions to film scenes for the movie. Because of this, the event was drawn out over 18 hours, with the final matches occurring around 7:00 AM. Everyone in attendance knew they were taking part in a once in a lifetime event and there was tremendous optimism that the movie would put the armwrestling “Over the Top”!