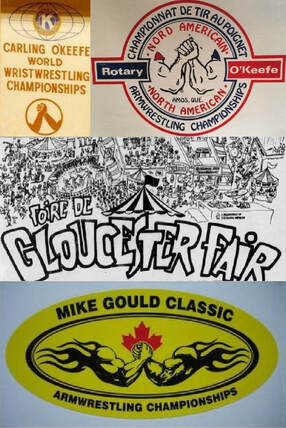 ​Armwrestling as has a long history in Canada—at least a few hundred years. However organized armwrestling matches, with formal rules and a referee, is known to date back at least to the turn of the 20th century. Montreal was where most of the biggest matches occurred. After the city hosted an inaugural national championship in 1905 to crown armwrestling champions in three weight classes, it became the site for most title defenses over the following 30 years (which generally happened through 3-out-of-5 challenge matches for a wager). Back then, if someone wanted a chance to prove they were the best puller, they went to Montreal to compete with men such as Arthur Dandurand, Théophile Massé, and Hector Décarie. But by the 1930s, public interest in armwrestling had started to wane. Over the next few decades, small tournaments were occasionally held in various Canadian cities and towns, but there was an absence of a regular annual tournament that would attract competitors from far and wide. The sport began receiving media attention once again in the early 1970s. Over the following 45 years, there would be an annual tournament unofficially recognized as “The Big One”. This event that was considered the toughest one to win, the titles usually being even harder to obtain than those up for grabs at the Canadian National Armwrestling Championships. Why? Because it offered significant prize money, had fewer weight classes, and was open to international competitors. If you were a Canadian who wanted to showcase your armwrestling abilities, this was the event where you could really get noticed. And if you were an American or a European athlete who wanted to see how you compared with many of Canada’s best, this was the tournament to attend. Only a small handful of tournaments over the years have held the informal distinction of being Canada’s toughest annual pro event*, and interestingly, they aligned quite nicely with the different decades.

*It’s worth noting that one-time major events have occasionally sprung up that may have eclipsed the tournaments presented in this article in individual years, but generally speaking, the events below built up and maintained their reputation over several years.
​

Three of the men who met each other in Timmins circa 1976 were John Miazdzyk, Gene Tatti, and Ken Taylor. All three were interested in promoting armwrestling in their respective provinces of Alberta, Ontario, and Quebec. The seeds were being planted for the formation of the Canadian Arm Wrestling Association.

Up to the mid-1970s, virtually all competitors were Canadian. The three pullers who experienced the greatest success in these early years were lightweight puller Wally Kapel, middleweight Vern Plummer, and heavyweights Roland Belair and Ron Bertin. Each won multiple titles. The competition became stiffer during the latter part of the decade, when several top American pullers began making the trip north. Once they did, they immediately started taking titles back home. Virginia’s Steve Stanaway was the first to win a title in 1977, but California’s Clay Rosencrans and Massachusetts’ Al Turner followed suit in 1978. (Clay actually entered all three weight classes in 1978. He won the lightweight and heavyweight divisions, but had to settle for third place in the middleweights.)

The loss of television coverage and reduced prize money signalled the end of the line for Canada’s biggest tournament. The final event was held in 1982, and it is perhaps most noteworthy because it is where legendary puller Al Turner won his final world title in dramatic fashion. He defeated Ottawa’s Rick Mallory—the two-time defending champion—and everyone else who stood in his way.

​
Some of the top pullers who competed and had success at the Carling O’Keefe World Wristwrestling Championships:

As the Carling O’Keefe World Wristwrestling Championships came to an end, another annual tournament was beginning to gather steam just a three-hour drive due east of Timmins in Amos, Quebec. Ken Taylor, the 1977 heavyweight champion in Timmins, had been one of the key figures behind the Amos event from its start in 1976. The prize money increased almost every year, and by 1984 the tournament was rebranded as the North American Armwrestling Championships. Held in an arena, and part of an annual expo, the tournament had more than 2,000 spectators. Despite Amos being quite a remote location, the prize money was such that the tournament was still able to draw pullers from considerable distances. Massachusetts’ Guy Lasorsa and Dan Mason were two of the first Americans to make the trip and enjoy success in 1981. In 1982, Dave Patton started coming up, and in 1983 19-year-old John Brzenk came to Amos for the first time. The latter two enjoyed their experiences so much that they returned every year. Gary Goodridge, Canada’s top heavyweight, started to do the same a few years later.

Unfortunately, the tournament became a victim of its success: with the same pullers attending every year and winning their respective classes every time, less competitive pullers began to lose interest in participating. Eventually, sponsors had a difficult time justifying contributing the $8,500 in prize money. After 1992, the cash prizes were significantly reduced and the tournament reverted to being a regional affair.

​
Some of the top pullers who competed and had success at the North American Armwrestling Championships:

With the North American Championships coming to an end, a new tournament in Ottawa, Ontario, started to receive considerable attention. The Gloucester Fair International Armwrestling Championships, first organized by Rick and Lise Blanchard in 1990, had a lot of things going for it. While the individual cash prizes weren’t quite as large as those given in Amos, more pullers had an opportunity to win them as the tournament offered women’s classes and men’s left-hand classes. Located within a few hours drive of both Montreal and Toronto, and only one hour from the Canada/US border, it was a prime location to attract talent. Ontario and Quebec’s top pullers met up each June at this outdoor tournament and the event’s pull from the eastern and western parts of the country increased as the years progressed.

The left-hand heavyweight class of the Gloucester Fair tournaments from the first half of the 1990s saw some of the most exciting matchups, with the world #1 ranking moving between Gary Goodridge, Steve Morneau, and Garvin Lewis on various occasions.

After 2002, the cash prizes were significantly reduced and eventually eliminated, and attendance consequently dwindled. But for about 10 years, the Gloucester Fair International Armwrestling Championships was a very big deal in Canadian armwrestling.


​Some of the top pullers who competed and had success at the Gloucester Fair International Armwrestling Championships:

As attendance at the Gloucester Fair began to dwindle in the early 2000s, it was increasing at an annual event held in Oshawa, Ontario, just east of Toronto. The tournament was originally called the Park Place Armwrestling Championship, after the name of the venue (The Park Place Sports Bar and Grill). It was first held in the late 1990s by John Roberts and Mike Gould. Before long the tournament was rebranded as the Central Ontario Armwrestling Championships and Mike took over as the lead promoter. He wanted to attract the best pullers, so he offered the largest cash prize purse in the country. These prizes, coupled with the tournament’s location in the heart of Ontario, traditionally Canada’s most competitive armwrestling province, made for some spectacular turnouts. In 2005, Mike was convinced to change the name of the event to the Mike Gould Classic, in recognition of the significant amount of money he invested into the tournament year after year.

Standing room only was the norm, but no one seemed to mind because of the intensity of the action. The events sometimes only wrapped up past midnight. In addition to attracting pullers from across Canada and the US, the tournament managed to attract a few elite international pullers who no doubt wanted to see how they would fare against Canada’s best pro pullers (and who were oftentimes surprised by the level of competition). Interestingly, very few American women attended. But based on the strength of the Canadian women who did regularly compete at the MGC, it’s hard to blame them for not wanting to come (😊).

The Mike Gould Classic was also the site of a few memorable supermatches, including the first right-handed ones between Devon Larratt and Travis Bagent (2005) and between Devon Larratt and Ron Bath (2006). The 2006 tournament saw a gathering of North American heavyweight greats, with Mike, Devon, Ron, John Brzenk, Earl Wilson, Travis Bagent, and Gary Goodridge in attendance.

In 2012 the event moved to Toronto, but this didn’t hurt attendance levels. In fact, attendance climbed almost every year and peaked for the 2015 tournament, which was co-branded as UAL 9 (Robert Drenk provided financial assistance to help the event go over the top). The tournament received 317 entries and pullers came from all over. The competition was so high that only two pro classes were won by Ontario pullers (George Iszakouits and Heidi Cordner). In addition to the stacked tournament, those in attendance were treated to a few spectacular supermatches, including one that saw Mike Gould emerge victorious over Richard Lupkes!

The 2015 MGC would end up being the last one. Mike had always wanted to make his tournament bigger and better each year, and without Robert’s involvement, the financial risk simply became too high. But he can rest assured that those who were fortunate enough to attend one or more of his events were blessed with many great memories.


​Some of the top pullers who competed and had success at the Mike Gould Classic:

​In the years since the last Mike Gould Classic was held, no other annual event has yet demonstrated itself to be worthy of the title of Canada’s Toughest Tournament. More recently the COVID-19 pandemic has made it difficult for such a tournament to emerge, but it will only be a matter of time before Canadians once again rally around a single huge annual pro event. It will be the one to attend to see where you stand in relation to Canada’s best.