How Organized Armwrestling Was Introduced to Eastern Europe 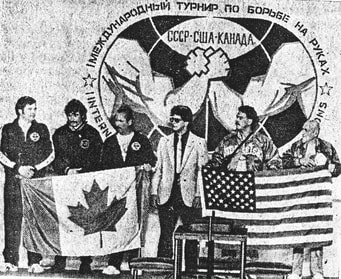 There are key events in organized armwrestling’s history that truly expanded the sport’s reach and, in turn, raised the overall level of competition. One such moment was when the World Wristwrestling Championship was first aired on American national television, making millions of people suddenly aware of the sport’s existence. Another was the movie Over the Top and the accompanying series of tournaments that were organized around the world. The introduction of the sport to the Soviet Union was yet another major step in the sport’s global expansion and is the focus of this story.

In late July 1988, Dr. James Stoxen, team physician for the American Armwrestling Association (AAA) and the American Powerlifting Federation, was in Russia serving as the USA team’s sports medicine representative at the first ever powerlifting competition between the US and the Soviet Union. While there, he met a Canadian sports exercise scientist by the name of Dr. Edmund Enos. 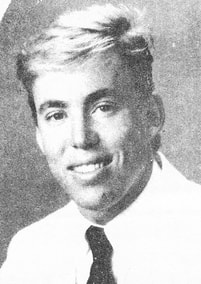 Dr. James Stoxen
​Dr. Enos was the Chairman of the Association for International Cultural Exchange Programs, a non-profit organization that specialized in coordinating such tours and events, and he was well connected with the USSR Ministry of Sport. Dr. Stoxen thought it would be amazing if he could help arrange a similar historic USA vs USSR armwrestling competition. Dr. Enos was unaware that armwrestling was an organized sport, but once he learned about the World Arm Wrestling Federation (WAWF), he agreed to initiate talks with the Ministry.

Following some negotiations, the Ministry consented to host the competition. A Canadian team would also be invited to compete. The details of the competition would be hashed out between Dr. Stoxen, Dr. Enos, and Dr. Vladamir Tchaikovsky, who was the president of the Bodybuilding and Powerlifitng Association of the USSR. (With armwrestling not yet existing in Russia, it was decided that it should initially fall under Dr. Tchaikovsky’s jurisdiction.)

To help the Soviets prepare, the WAWF supplied a professional video that had been made of the 1987 World Championships that were held in England. This became the Soviets’ primary source of information to analyze and determine how to train for the sport. An armwrestling table built to WAWF specifications was also donated, so that the hosts could learn how to build their own tables for the competition.
​
The event would be held the second week of August 1989 and was open to pullers of different levels of ability. In addition to the armwrestling competition, pullers would also get to enjoy an elaborate cultural and sightseeing program. A significant obstacle, however, was the cost. At $2,375 per person, it was not a trip that everyone could afford.

Ad that appeared in several issues of the Arm Bender
In addition to the competition itself, the North Americans would we conducting information sessions for the Soviets in which they would demonstrate armwrestling techniques and speak about how to train for the sport. The Soviets, on the other hand, would deliver lectures and practical sessions on their scientific approach to exercise and strength training.
​
New York’s Ray Darling and Florida’s Ray Taglione, both on the AAA Board of Directors, were selected to be the co-captains for Team USA and they became involved in helping arrange the armwrestling-related portions of the trip, while Dr. Stoxen continued to be the main contact for the tour itself.
Armwrestling ability was not the only consideration when selecting members for Team USA. A track record of good sportsmanship was also important, as it was of great importance that the Americans leave the Soviets with a positive impression of the sport. While most of the Team USA members ended up being very experienced pullers, a few were quite new to the sport. The final roster consisted of 12 men: Ray Darling, Socrates Fronhoffer, Robert Greenberg, and Jim Carman from New York; Arthur “Badger” Drewes and Darren Courtemarche from New Hampshire; Larry Fontaine from Connecticut; Brian McSherry from Ohio; Ray Taglione from Florida; Alan Bown from Washington; Tom Imperato from New Jersey; and Michael Veillette (state unknown).

Team USA
With no one taking the reins to organize a Canadian team for the trip, Dr. Enos reached out to British Columbia’s Mike Kadar, who was the reigning WAWF world champion in the 100 kg division, to see if he would be interested in representing Canada at the historic tournament. He was, and Team Canada ended up being a team of one. 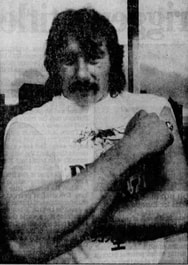 Team Canada
The Soviets, having no one with organized armwrestling experience in their ranks, selected some of their strongest weightlifters and wrestlers to take part in the competition. The most famous member of Team USSR was likely Sultan Rakhmanov, the 1980 super heavyweight Olympic gold medal weightlifter.

On Saturday, August 5th, all members of Team USA as well as their companions met up in New York City at JFK International airport to depart together to Moscow for the “International Arm-Wrestling School, Course and Friendship” competitions. They were joined by Mike Kadar (Team Canada) and two of his friends.
​
Upon arriving in Moscow on Sunday, the North American delegation was greeted at the airport by Dr. Enos, who had arrived separately, and two interpreters. The pullers were escorted to their hotel and soon after checking in the sightseeing began, with the group heading to visit Red Square. 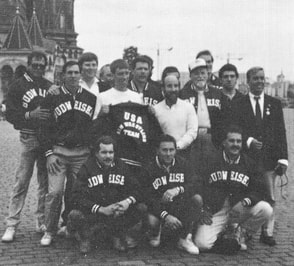 Team USA in Red Square
On Monday, sightseeing activities continued, with a trip to the Kremlin, and to the Moscow Circus in the evening. The American pullers received attention wherever they went when sporting their matching Team USA jackets. That night they also met their host Victor Shankon (the Sports Minister), Sultan Rakhmanov, the Russian boxing coach, and many others. Whenever the North Americans were accompanied by their hosts, they never had to pay for anything.

On Tuesday, while most of the North Americans went on a cruise of the Moscow River and then to do some shopping, the two Rays, Alan, and Dr. Stoxen went to meet the Russian athletes at a gymnasium to do some technique demonstrations. Later in the afternoon, everyone got on a bus and headed to the Izmaylovo Sports Palace, which was the venue for the first of three nights of competition.

The tournaments were not tournaments in the traditional sense. Rather, they were a series of one-on-one matches, pairing a North American against a Russian. Though the exact details aren’t clear, it seems that each North American armwrestled just one opponent each night, possibly in a two-out-of-three format. Whichever country won the most matches was declared the winner.

American David Fontaine and Canadian Dennis Christianson officiated the competition along with a couple of Russians who learned by following the North Americans’ lead. There was some confusion at times because of the language barrier, but overall, things went well.
​
The North Americans dominated the first night of competition, with every team member winning their matches with just one or possibly two exceptions. Many of the Soviet athletes were physically impressive, and in many cases significantly larger that their North American opponents, but from a technical standpoint, they were simply outclassed. 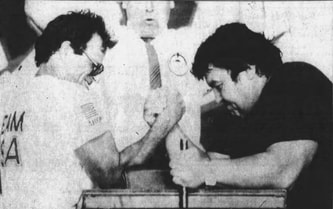 Ray Darling pulling Sultan Rakhmanov during the first night of competition
For the second tournament, held on the Wednesday night at a different venue, the Soviet team re-arranged their roster to try to match up some of their stronger athletes with some of the weaker North Americans. The strategy seemed to work well initially, with Team USSR winning the first three matches of the night. The crowd of 500 spectators went wild. Unfortunately for them, the momentum quickly swung in the other direction, with the rest of the matches being won by Team USA and Team Canada.

By the third night of competition at Gorky Park, Team USSR recognized that they had been soundly defeated, but this didn’t stop everyone from having fun. There were some humourous moments, like when one of the Russian pullers asked to pull Mike Kadar left-handed instead of right-handed, but met the same decisive outcome. After the tournament was done, the Soviet pullers returned to the hotel with the North Americans and everyone enjoyed a great night of after pulling.

Throughout the week, the Soviet hosts went above and beyond to make their North American guests feel welcomed. On the Friday, Team USA was treated to an incredible eight-course Chinese dinner. Later that evening, there was a formal banquet, where several toasts and farewell speeches were made and special awards were given to the week’s top athletes. Of course, the night ended with even more pulling.

In all, Socrates, the two Rays, Jim, Darren, Badger, Alan, Brian, Larry, and Mike had each had three first place finishes, while Robert and Michael had each won one of them. The Soviets were impressed by all the North Americans, but perhaps by no one more than Ray Taglione, who at 135 lbs whipped the biggest and strongest Russians that were put against him. It was truly an eye-opening experience.
The historic first series of competitions prompted the formation of the USSR Armwrestling Federation in 1990, which then led to the establishment of federations within several eastern bloc nations after the fall of the Soviet Union in 1991. As very little printed information existed about armwrestling techniques and training, the footage from the 1989 matches was used as a primary tool for the development of training protocols.

Ray Darling, like many other members of the North American team, thought Team USA would defeat Team USSR during their first encounter. But with the importance attributed to sports by the Soviets, he figured it wouldn’t take long for them to catch up. He turned out to be right: catch up they did. In 1991 they were already starting to win gold medals at the WAWF Worlds. And by 1994, they were winning the majority of them. The sport had reached eastern Europe, and the age of North American dominance was over…


Special thanks to Ray Darling, who granted the author an interview before his sudden passing in 2013. He said that the 1989 trip to Russia to introduce armwrestling to the Soviets was one of the biggest highlights of his career in the sport.

Supplemental information and pictures were found in various newspapers and issues of the Arm Bender of the period.